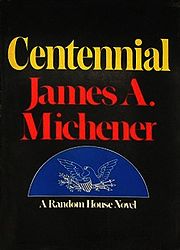 One of the great novelists of the twentieth century, James A. Michener, set one of his best-known novels right here in Colorado.  Michener spent a great deal of time in Colorado researching Centennial, renting an apartment in Capitol Hill and also spending much time in the northern part of the state, where the novel is set.  Published in 1974, Centennial was adapted as a television mini-series in 1979.  Upon giving Colorado the national spotlight on prime-time TV, Centennial is considered to be one of the factors contributing to Colorado’s population boom in the 1970s.

There is a city in Colorado today called Centennial, but this is not the place the novel was based on; rather, the Arapahoe County locale is fairly new and took its name from the novel.  Instead, Michener placed his Centennial in northern Colorado, mostly based on Greeley.  Many of the events depicted in the story, however, were inspired by true events in Colorado’s history.

The early portions of the novel look at the geological and natural formation of what would be Colorado.  You can learn more about this topic by visiting the Colorado Geological Survey.

Much of the book concerns the Arapaho Indians and their struggles through Colorado history.  The Arapaho and their allies the Cheyenne lived on Colorado’s eastern plains.  The horrible Arapaho massacre and the character Col. Frank Skimmerhorn depicted in the novel are based on the true story of Col. John Chivington, the “fighting parson,” and the Sand Creek Massacre, which actually occurred 148 years ago today.  You can read about Silas Soule, on whom the character Captain MacIntosh is based, in Western Voices, a Colorado Historical Society publication available from our library.

The novel is sprinkled with other characters based on our state’s history.  The trader Levi Zendt is somewhat based on the real-life George Bent.  Hans “Potato” Brumbaugh may have been inspired by Rufus “Potato” Clark, a major potato farmer south of Denver who carved out a road to the city to sell his potatoes.  That road became known as Broadway.  Like Brumbaugh, Clark started out as a prospector and later became a pioneer in irrigation.  Other characters may not be so obviously based on specific historical persons, but all of the characters typify those who made the West what it was (and is) — Indians and Mexicans, trappers and traders, settlers, soldiers, ranchers and cowboys, farmers and laborers, lawmen and those who didn’t respect the law — as depicted in Michener’s classic.

The second half of the novel emphasizes Centennial’s (or, northeastern Colorado’s) heavy reliance on agricutlure.  The Venneford Ranch is probably inspired by Monfort, a major cattle marketing and distributing company near Greeley until 1987.  Another topic covered in Centennial is dryland farming.  The eastern plains of Colorado experienced the effects of the Dust Bowl in the 1930s, so memorably depicted by the character Alice Grebe in the story.  The Grebes reflect many small farmers who struggled during the simultaneous Dust Bowl and Great Depression.  For a first-hand look at what dry farming was like in the early years of the twentieth century, before the Dust Bowl hit, see the 1917 publication Dry Farming in Colorado, published and circulated by the Colorado State Board of Immigration — who sought to attract farmers to Colorado the same way Mervin Wendell did in Centennial.

James Michener is no longer living, but his legacy continues at the Michener Library at the University of Northern Colorado, which houses many of his papers.  For an interview and in-depth look at Michener and the writing of Centennial, see “Colorado’s People:  Through the Pen of James A. Michener” in the 1982 Annual issue of Colorado Heritage Magazine, available from our library.

21 thoughts on “The History Behind the Fiction: James Michener’s "Centennial"”