Did you know that state transportation agencies, such as the Colorado Department of Transportation (CDOT), are required by law to study and document a project site’s historical, archaeological, and paleontological resources? These resources are typically grouped together under the term “cultural resources” and their documentation is required under the National Environmental Policy Act, or NEPA. CDOT’s website provides a summary of NEPA:

NEPA, or the National Environmental Policy Act of 1969 (42 USC 4321-4335), was enacted to promote a national policy for protection of the environment and to raise awareness of the importance of natural resources to the nation. NEPA requires federal agencies, in cooperation with state and local governments, to address the environmental impacts of a proposed federal action or an action that receives federal funds. NEPA also established the Council on Environmental Quality (CEQ), which developed regulations (40 CFR 1500-1508) for implementing the procedural provisions of NEPA. NEPA requires preparation of an environmental document addressing the impacts associated with a project and to avoid, minimize, or mitigate those impacts. 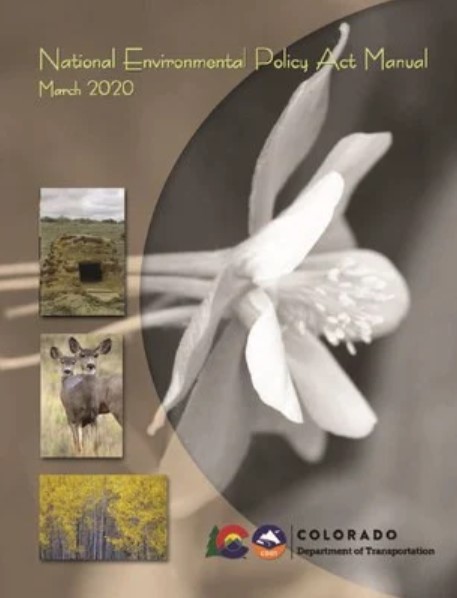 Under NEPA, environmental impact studies must include not only reports on cultural resources, but also their impacts on air and water; plants, wildlife, and other natural resources; noise; and the socioeconomic effects faced by nearby residents. For more information on what CDOT is required to study under NEPA, see their NEPA Manual, which is updated every few years. (For comparison purposes, prior versions of the manual are available from the State Publications Library).

For those researching Colorado’s past, CDOT environmental studies can yield fascinating information. Some of the most thoroughly documented have been archaeological studies. Between 1993 and 2008, CDOT published a series of books documenting various archaeological investigations the agency undertook around the state. Each book in the series is available for checkout from the State Publications Library. They include such topics as the the investigation of a frontier Denver hotel, the Tremont House; a pictograph site in Routt County; human burial sites in Adams and Jefferson Counties; two historic ranches in Las Animas County; and various dwelling sites of early Native Americans. The books in this series are available for checkout from the library and through Prospector.

While CDOT no longer produces this series, they do still publish detailed cultural resource studies in each of their Environmental Impact Statements and Environmental Assessments. Some recent studies of interest include the I-70 East project through Denver; US 50 in Eastern Colorado; and I-25 through Pueblo.