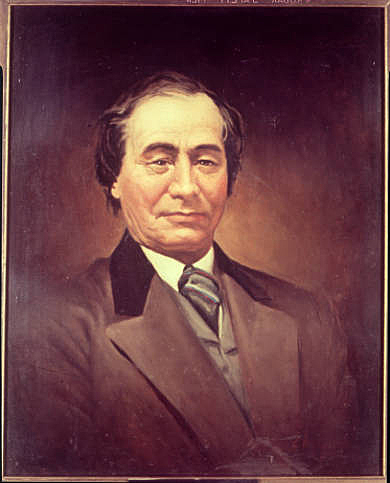 Why Important: Trader; tried to bring peace between the white settlers and the Indians.

William Bent was born in St. Louis, Missouri, one of eleven children. As a teenager, Bent decided to leave St. Louis with his brother Charles and try fur trapping in the west. Beaver pelts, or furs, were fashionable back east when used to make men’s hats.

In the early 1800s, there were no towns or cities in the west, and travel was hard. On one of their trips, the Bent brothers traveled along the Santa Fe Trail, which started in Missouri and wound south to Mexico. Along the way they traded with whites, Indians, and Mexicans. When beaver hats went out of style, they started trading buffalo hides instead.

In 1833, William and Charles and their business partner, Ceran St. Vrain, opened Bent’s Fort on the Arkansas River. At the time, it was the biggest building between Missouri and the Pacific Ocean!

William quickly made friends with the nearby Cheyenne, and worked hard to keep peace between the Indians and the white settlers. William’s first wife was Owl Woman, daughter of a Cheyenne chief. They had four children. After Owl Woman died, William married three more times, and two of his marriages were to other Native American women.

In 1846, war broke out between the United States and Mexico. In 1849, during the war, Bent’s Fort was burned to the ground. A few years later, William built a new fort thirty miles east[footnote]“Fort Wise-.” Western Mountaineer, September 13, 1860. CHNC.[/footnote]. The Army eventually took over Bent’s new structure and called it first Fort Wise, then later Fort Lyon. William went to work for the government as an Indian agent. He tried hard to keep the peace between the Native Americans and the many new settlers who were pouring in during the 1859 Colorado gold rush.[footnote]Rocky Mountain News, April 19, 1861. CHNC[/footnote] His efforts weren’t enough to keep the peace, though, and he resigned. In 1864, Bent left Colorado for Kansas after the terrible massacre on Sand Creek, where Col. John Chivington ordered an attack to destroy a camp of Cheyenne Indians, killing 163 men, women, and children.[footnote]“Big Indian Fight!”Rocky Mountain News, December 7, 1864.CHNC[/footnote]

In later life, William Bent moved back to southeast Colorado and lived on a ranch. He died of pneumonia in 1869. Today, Bent’s Fort has been reconstructed to look exactly as it would have in 1846. The site, near the town of La Junta, is now called Bent’s Old Fort.