What were worker’s compensation laws like a century ago?  You can find out in the 1915 publication Workmen’s Compensation Laws Passed by the Twentieth General Assembly of the State of Colorado, available digitally from our library.  That year the legislature created the Industrial Commission of Colorado.  Their biennial reports, also available digitally from our library, offer a fascinating look at the state of worker’s compensation a century ago and are a extremely important historical resource because they detail every claim, whether awarded or denied.  For example, 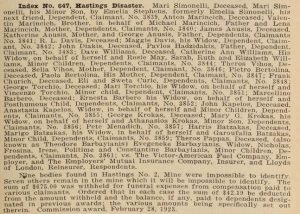 The 1915 laws came on the heels of several years of labor unrest, and were issued during the height of the Progressive Era.  This was also during a time when mining and industrial jobs made up a huge proportion of Colorado’s workforce.

Also interesting — notice that back then the concept was termed “workmen’s compensation,” not “worker’s compensation” as we say today.  Yet this did not mean that female workers were excluded from compensation; just that most employees were assumed to be male.  Women’s claims were rare but did occasionally appear in the industrial commission reports:

A quick search of our library catalog shows that the “workmen” term was used as late as 1989, well after women had joined the workforce.  Search our catalog for many more resources on worker’s compensation and insurance from a century ago through the present day.