In 1990 Colorado voters passed a law to allow limited gaming in three historic towns — Central City, Black Hawk, and Cripple Creek.  Gambling had been prohibited in Colorado in the 1876 Colorado Constitution.  Over the years, bingo and raffles, pari-mutuel (horse) betting and a state lottery were accepted into law, but casino-style gambling was outlawed in the state until 1990.  How did proponents sell gambling to voters?  By assuring citizens that 1) gaming would only be restricted to certain towns, not statewide and 2) a percentage gaming funds would go toward historic preservation in Colorado through the State Historical Fund, and to tourism promotion.  (Beginning with Amendment 50 in 2008, some of the gaming funds also go to community colleges). 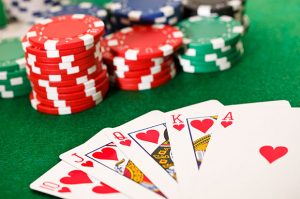 Two years later, limited gaming was again on Colorado’s ballot.  1992’s Amendment 3 would have, if passed, expanded gambling into Trinidad, Walsenburg, Naturita, Leadville, Silver Cliff, Lake City, Silverton, Oak Creek, Grand Lake, Walden, and Dinosaur, as well as the entire counties of Las Animas, Hinsdale, and Huerfano.  Further, Amendment 4, also on the ballot that year, would have legalized gambling in Burlington, Evans, Lamar, Las Animas, Sterling, Antonito, Garden City, Grenada, Holly, Julesburg, Ovid, Milliken, Peetz, and Sedgwick, along with the counties of Logan, Prowers, and Sedgwick.  Finally, Amendment 5 would have allowed gaming in the town of Parachute, while Amendment 9 would have allowed gaming in Lower Downtown Denver.  Funds from expanded gaming would go to various entities including public schools, tourism, and historic preservation.  All four amendments were soundly defeated — according to the official Abstract of Votes Cast (available for checkout from our library), the first three amendments were each defeated with an average of 400,000 yes votes and 1,000,000 no votes.  Amendment 9 was defeated by an even bigger margin — 292,961 for and 1,200,336 against.

However, 1992 voters did approve a measure that required counties, cities, and towns to hold elections to approve gaming in their town before going to a statewide vote.

Limited gaming again appeared on the ballot in 1994, and was again defeated.  Amendment 13 would have expanded gaming to Manitou Springs and to public airports, while Amendment 14 would have legalized gambling in Trinidad.  According to the book Riches and Regrets:  Betting on Gambling in Two Colorado Mountain Towns (1996, University Press of Colorado), which is available for checkout from our library, numerous other states defeated gambling measures that year, suggesting national trends.

You can read about the 1992 and 1994 amendments, including arguments for and against, in the official “Blue Books” for those years.  The Blue Books are available digitally from our library.  You can find other Blue Books (the state’s official non-partisan analysis of ballot issues) by searching our library’s Blue Book finding aid.  You can find more about gambling in Colorado from the Colorado Department of Revenue.