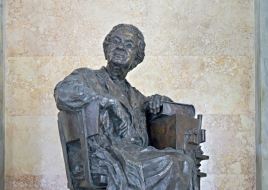 At the Statuary Hall at the United States Capitol in Washington, D.C., each state commemorates two of their greatest citizens.  The 100 statues include politicians, war heroes, explorers, artists, inventors, and other notables from all periods of U.S. history.  Among them is Colorado’s contribution* — and one of only nine women in the Hall — Dr. Florence Rena Sabin. 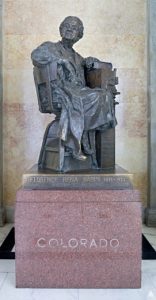 Originally from Central City, Colorado, Dr. Sabin (1871-1953) was among the first handful of women to attend the medical school at Johns Hopkins University.  In 1917, she became a professor at Johns Hopkins, and during the 1920s and 1930s held many prestigious positions in national medical associations.  Dr. Sabin’s passion was medical research, particularly on tuberculosis, which was widespread in America in the early 20th century.  In 1938, after retiring from the Rockefeller Institute for Medical Research, Dr. Sabin returned to Colorado, where she worked closely with governors and legislators to develop significant health laws for the state.  Appointed Denver’s Manager of Health and Charities in 1947, Dr. Sabin employed new techniques such as x-ray technology in fighting tuberculosis, which reduced the city’s tuberculosis rate by half.

Recent Levels of Known Tuberculosis in Colorado, a 1957 report from the Colorado State Department of Public Health, explained Dr. Sabin’s work in Colorado and her contribution to the reduction of the state’s tuberculosis rate.  The report quotes Dr. Sabin as saying — at age 77 — “It seems to me imperative that we find out the zones of high incidence of this disease and start a ten year program to correct present conditions.”  She only lived five more years, but in that time “enthusiastically sponsored…and helped to implement” the program, with significant success.  (See pages 5-7 of the 1957 report).

The statue of Dr. Sabin was placed in the U.S. Capitol in 1959.  Click here to read the Colorado Senate’s Joint Resolution for the dedication of the statue.  Dr. Sabin’s ashes are housed in a book-shaped urn in the mausoleum at Denver’s Fairmount Cemetery.