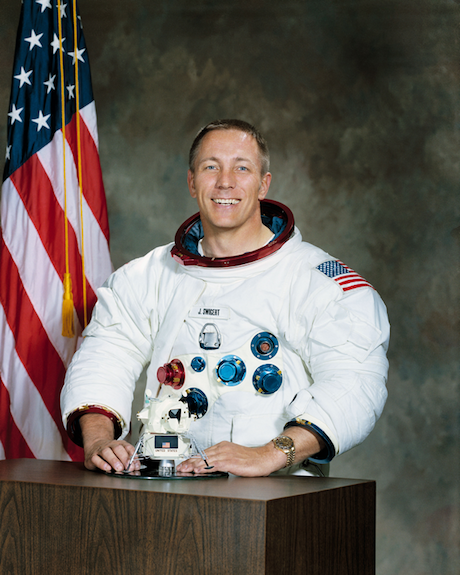 Why Important: One of 24 people who have flown to the moon; Elected to U.S. Congress

Confronted with the grave peril of outer space, John “Jack” Swigert, Jr. demonstrated a courage and heroism that defies the human spirit. Jack was a member of the Apollo 13 crew that survived a ill-fated mission to explore the moon in 1970.

Jack Swigert began flying airplanes at the age of 13, paying for flight lessons with his paper route proceeds. He graduated from Denver’s East High and was a member of that school’s powerful Angel football team.1“Local News.” Steamboat Pilot, August 30, 1951. CHNC  After earning a Bachelor of Science in mechanical engineering2“Local News.” Steamboat Pilot, May 26, 1955. CHNC  from the University of Colorado, he served with the United States Air Force as a pilot in Korea. He joined the National Aeronautics and Space Administration (NASA)3“Brotzman’s Briefings.” Douglas County News, April 16, 1964. CHNC  in 1966, and as one of 19 astronauts chosen for space travel. He served on the Apollo 13 mission as the pilot of the command module. When there was an explosion on board, it was Jack who famously reported to Mission Control, “Houston, we’ve had a problem.”

After the aborted mission and heroic rescue of the Apollo 13 crew in 1970, President Richard Nixon awarded Swigert the presidential Medal for Freedom for his bravery in guiding the Apollo 13 space capsule back to Earth.

In November of 1982, Swigert was elected to the House of Representatives from Colorado’s 6th Congressional District. Tragically, he died of cancer before taking the oath of office. In 1997, the state of Colorado erected a statue of him in the National Statuary Hall in Washington D.C.