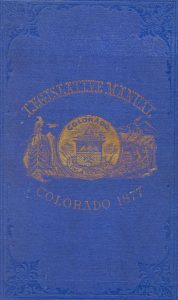 One of the gems of our library collection can now be viewed online.  The 1877 Legislative Manual of Colorado contains over 350 pages of information on the new state for the members of the first General Assembly.  (Colorado became a state in 1876, after that year’s territorial assembly had concluded).  The manual includes information on how the new legislature would be organized, a “manual of parliamentary practice,” a “manual of customs, precedents, and forms,” House and Senate rules, lists of officers, biographical sketches of legislators, a brief history of Colorado, and more.  One of the great reference resources in this book is the list of all Colorado post offices (cities and towns), and their counties, on pages 316-317.  This is useful for researchers looking for information on early Colorado towns and whether they were incorporated when Colorado became a state. Over time, many of these towns have disappeared.  Do you know where Orodelfan, Colorado, was located?  How about Hortense?  Island Station?  Badito?  Eureka?  Gomer’s Mills?  Nepesta?  Livermore?  Find out in this great resource.
colorado historygovernmentlegislaturetime machine tuesday
Facebook Twitter Pinterest LinkedIn