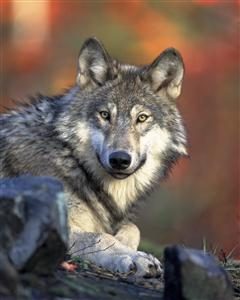 At one time, according to the Colorado Division of Parks and Wildlife (CPW), the gray wolf could be found in every part of Colorado, but over time, ranching and wolves’ impact on livestock caused their eradication and the last wolves in Colorado were killed around 1940.  Now, there are proposals to bring the wolf back to Colorado, partly to help keep down elk populations; however, many livestock owners are opposed.  There have been some suspected sightings of wolves in Colorado, but none have been confirmed — however, CPW district wildlife managers believe they sighted a wolf near Walden, along the Colorado-Wyoming border.  You can view a video of the sighting and learn much more about gray wolves at the CPW’s gray wolf species webpage.  Also, visit CPW’s Gray Wolf Management webpage for more technical information.  Finally, the CPW publication Wolves:  Knocking At Colorado’s Door presents information for all ages on the controversy over gray wolf reintroduction in Colorado.