High in the mountains above timberline lives one of my favorite Colorado wildlife species, the mountain goat (Oreamnos americanus). In spite of their name, mountain goats are actually not true goats. In fact, mountain goats are more closely related to some African antelope species than they are to domestic goats! Male mountain goats (“billies”) can weigh up to 300 pounds, while the females (“nannies”) tend to be about half that size. Billies and nannies both have horns, yet unlike many other Rocky Mountain ruminants, mountain goats rarely fight with one another. Feeding primarily on grasses and flowering plants, mountain goats live in herds and family groups, but you will occasionally see them off foraging on their own. 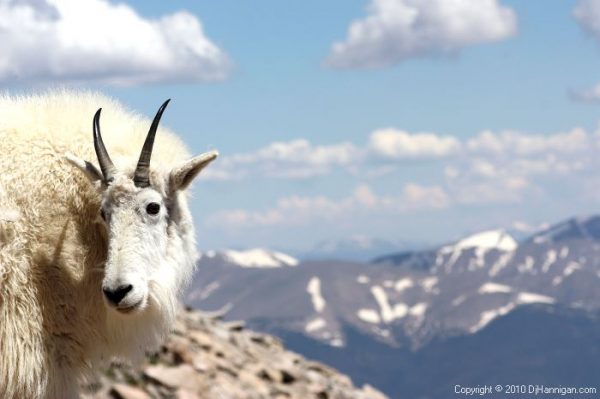 During the winter, mountain goats develop a thick, woolly coat, which they shed during the spring and early summer. This is why they sometimes have a raggedy or patchy appearance — they shed their winter wool by snagging it on bushes and tree branches. Mountain goats have a number of unique adaptations that allow them to survive and thrive in an ecosystem characterized by steep, rugged terrain. Living in an ecosystem that is inhospitable to most predators is very much to the mountain goats’ advantage, as is their white coat, which provides camouflage in the snow. Their hooves are padded to help them grip rocky surfaces and ledges, while flexible toes provide for increased traction. They also have extra-strong hind legs that allow them to spring up steep slopes with ease. Mountain goats learn to climb at a very young age, but nanny goats still protect their kids by standing downhill from them as they forage, so she can block them if they fall.

You may be surprised to learn that, despite being so well adapted to Colorado’s higher terrain, mountain goats are in fact not native to Colorado. They were brought here from the Northern Rockies as game animals in the 1940s-1970s, but they have survived and thrived in our state. 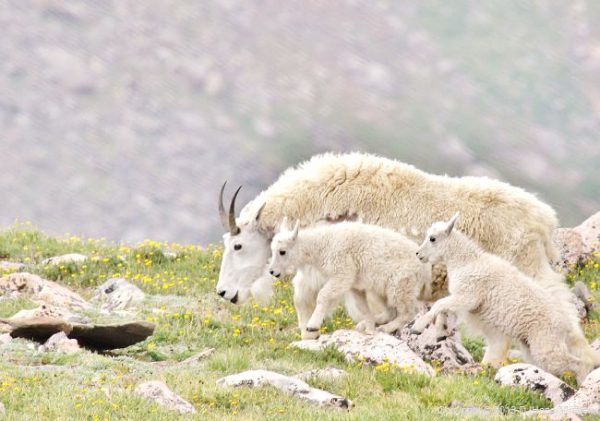 Because they live at high elevations that are often inaccessible to humans during the winter months, the best time to view these very photogenic animals is during the late spring and summer. In fact, young mountain goats are born in late May and early June, so in the early summer you have a good chance of spotting a nanny goat foraging with her adorable kids. According to Colorado Parks & Wildlife (CPW), the best places to view mountain goats along the Front Range are at Mount Evans and at Grays and Torreys Peaks. Further west, mountain goats can be spotted near Independence Pass and at Cottonwood Lake (near Cottonwood Pass), both in the Sawatch Range, and near the Million Dollar Highway in southwestern Colorado. Because snow and ice can result in closure of these routes well into the spring, check to make sure they are open before heading out.

Goats are most active at dawn and through the morning; they also come out to forage in the early evening. You’re least likely to spot a mountain goat at midday because they rest during that time. CPW warns viewers not to get too close to these large animals, and recommends using binoculars or a spotting scope to get a good view. Getting too close not only puts you at risk of danger, but also distresses the goats. The same goes for dogs, so leave your pets at home. In some places, such as Mount Evans, the goats have become so tolerant of people that they will occasionally come up close to your car. Still, do not feed the goats — it’s against state law. 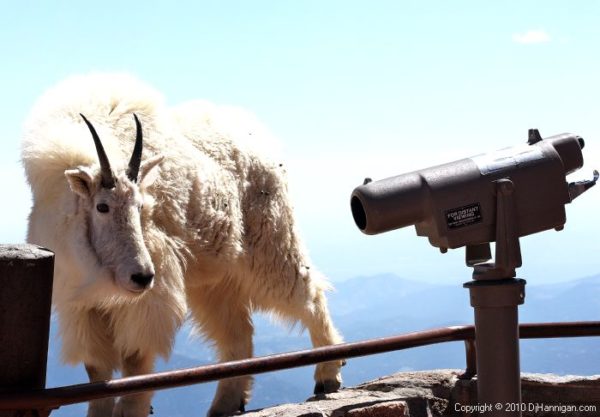 To learn more about mountain goats and how to view them, see the CPW publications Bighorn Sheep & Mountain Goats: Colorado’s Mountain Monarchs and Summertime Reveals Secrets of the Alpine Tundra. 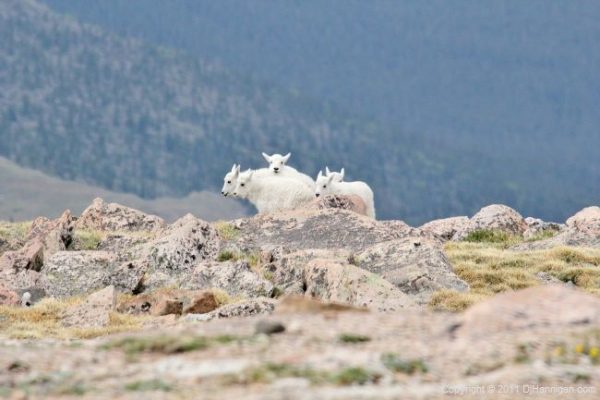 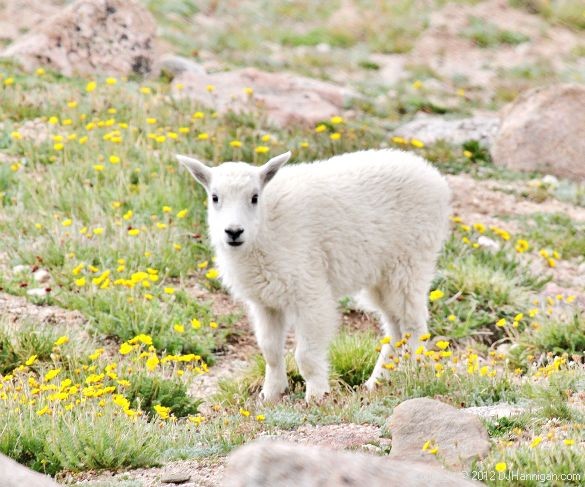 All photos by David Hannigan, courtesy of Colorado Parks & Wildlife.