Since Colorado became a state, thirty-eight people have served as Colorado’s Attorney General, beginning with A.J. Sampson in 1877. Two Colorado Attorneys General, Gale Norton and Ken Salazar, have served as United States Secretary of the Interior.* Several others have served in Congress. One third of them served in the State Legislature. The office has been held by twenty-three Republicans, twelve Democrats, one Populist, and two elected on the “fusion ticket” of the 1890s — a mix of votes from members of the Populist, Democrat, and Silver Republican parties. 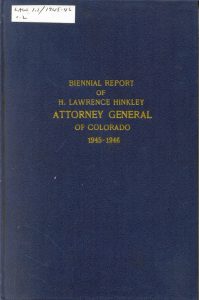 The activities, cases, and opinions of the state Attorney General have been recorded in the office’s Biennial Report. The full run of the reports from 1877 through 1966 can be viewed digitally from our library, along with more recent reports from the past decade. You can also learn more about Colorado’s Attorneys General in The People’s Lawyer: The History of the Colorado Attorney General’s Office, published in 2007 by Attorney General John Suthers and his staff. The book examines each Attorney General in detail. You can also find short bios and photos on the History of Colorado’s Attorneys General webpage from the Department of Law.