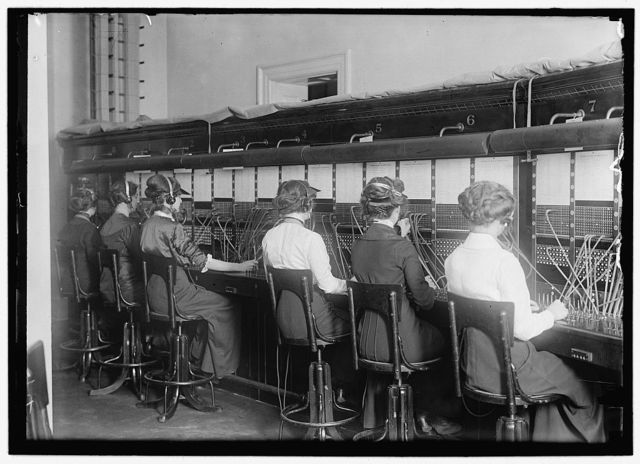 Alexander Graham Bell first patented the telephone in 1876, the same year Colorado became a state. At first, people believed it to just be a passing fancy, and would have been astounded to see how much it has changed society and the world we know today. A few visionaries, however, saw the promise in this new invention.

Just a couple of years after Bell’s patent, in December 1878, Denver’s Frederick O. Vaille exhibited a telephone in a shop window and began gathering names of potential subscribers. In just two months, Vaille had interested 161 subscribers, according to a 1928 Colorado Magazine article by his brother, Howard T. Vaille. The first switchboard was set up in Conrad Frick’s shoe store at 15th and Larimer, and by the spring of 1879, Denver had telephone service.

Other towns in Colorado adopted telephone service soon after, especially the mining towns like Central City, Black Hawk, Georgetown, and Leadville, whose telephone exchange was started by Horace Tabor. Other early adopters of the telephone were Golden, Boulder, Gunnison, Colorado Springs, and Pueblo. “Those who engaged in the telephone exchange enterprise were…truly pioneers,” wrote Howard Vaille. “They did not have the accumulated experience of centuries to guide them and no fund of common knowledge of experience from which to draw.”

While it started out with only a handful of subscribers, the telephone grew in popularity and usage in the coming years. Frederick Vaille incorporated the Colorado Telephone Company in 1881, and in 1911 it became the Mountain States Telephone and Telegraph Company. Telegraph interests, which had originally competed with the telephone, realized they were doomed and sold out to the telephone companies. Telephone poles sprouted all over Denver and other cities with service. Horace Tabor, after moving to Denver, continued to be involved in the expansion of the telephone, as well. Denver’s exchanges were moved out of the shoe store and into Tabor’s huge new office block at 16th and Larimer. Eventually, the state’s telephone headquarters became the Mountain States Telephone and Telegraph Building at 14th and Curtis.

Howard Vaille’s Colorado Magazine article is a valuable first-hand account of the development of telephone service in Colorado. Vaille describes how the early telephones worked, explores the different exchanges that were set up around the state, and looks at early reactions to the telephone. For instance, many stores initially did not want telephone service, says Vaille, because they were afraid customers would call and ask for items to be delivered. Like any new technology there were those who resisted for one reason or another, but eventually, telephone service became widespread. By 1928, when Vaille wrote his article, the original 161 telephones in Denver had grown to 171,000 statewide, with 85,000 in Denver.

With the growth of telephone service and corporations came the need for state regulations. The Public Utilities Commission (PUC) was formed in 1913 to oversee services such as railroads, electricity, and telephones. The PUC’s reports of decisions from 1914 to 1930 have been digitized and made available online by our library. These reports outline the development of early telephone regulations in Colorado, along with the other utilities. Search our library’s online catalog to find numerous resources about telephone and telecommunications services in Colorado, especially in the last forty years.

Writing in 1928, Vaille predicted, “As to the future, there will be ten telephones where now there is one, fifty billion dollars invested where there are now four billion; and as to the instruments, what will they be? It is impossible to conjecture.”