Remember the “brown cloud”?  This visible air pollution was the embarrassment of our city for several decades.  The City of Denver’s website on the history of air quality in Denver describes the brown cloud as resulting from “Denver’s location at the foot of the Rocky Mountains, mak[ing] it prone to temperature inversions in which warm air traps cooler air near the ground, preventing pollutants from rising into the atmosphere.”  This caused Denver to exceed EPA air quality standards continually in the 1970s and 1980s. 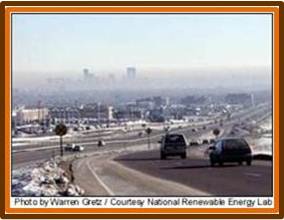 Before the term “brown cloud” started being used, in 1962 — just as the city was entering its era of high automobile pollution — Colorado State University’s Department of Atmospheric Science conducted A Study of Denver Air Pollution, available online from our library.  The study offered a history of air pollution in Denver and addressed the question of whether the City and State governments needed to work on remediation, as well as how development patterns should proceed based on diminishing air quality.  Finally, the study explored “methods for a systematic approach leading to definitive computations explaining Denver pollution.” 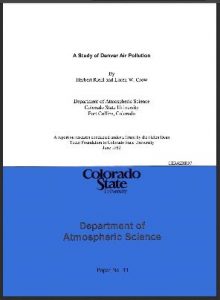 Four years later, the same CSU department conducted a follow up study, Further Studies of Denver Air Pollution.  This time, the study went much deeper scientifically to show that, essentially, the issue needed further study.  As the years went by and the issue became more of a concern, more publications appeared on Denver air pollution, not just from CSU but also from the Colorado Department of Health, the Department of Local Affairs, the Department of Highways, and other agencies.  Too numerous to list here, the many publications produced during the 1970s and 1980s by these agencies, which can be discovered in our library’s web catalog, give a detailed history of the development of air quality laws and mitigation in the Mile High City.