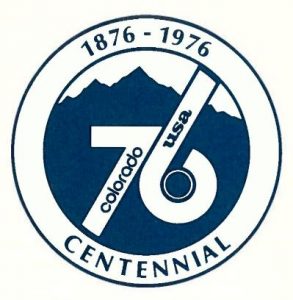 A lot was going on in Colorado in the year 1976.  First of all, while the nation celebrated its bicentennial, the Centennial State celebrated its own centenary milestone.  In our library you can view a number of materials from the Colorado Centennial-Bicentennial Commission.  Our library has had several of these documents digitized, including the official teacher’s guide, souvenir program, and, most significantly, Once in a Hundred:  The Final Report of the Colorado Centennial-Bicentennial Commission, which not only gives information on commission activities, financing, and marketing, but also offers descriptions of all of the programs, organized by date and county, as well as hundreds of photographs of the special events.

1976 was also a significant election year for Colorado; there were several important issues on the ballot.  These included a constitutional amendment regarding construction of nuclear power plants; repeal of the “Equal Rights Amendment,” (i.e. Equality of the Sexes), which had been added to the State Constitution in 1972; a proposed statute to exempt food purchases from sales tax; establishing a returnable beverage container deposit law to encourage recycling; setting limitations on tax increases; and several other measures.  You can read analyses of each ballot measure, along with arguments for and against, in An Analysis of 1976 Ballot Proposals, also known as the “Blue Book.”  So what did the voters decide?  You can probably guess on most of them — Section 29 still protects the equal rights of the sexes and CO doesn’t appear on the bottom of any beverage bottles.  Tax exemptions on groceries actually didn’t pass in 1976 — that law went into effect January 1, 1980.  And what about the nuclear power plants and tax increase limitations?  You can check out the number of votes for and against these and the other measures in the Colorado Secretary of State’s 1976 Abstract of Votes Cast.  1976 was also a presidential election year, so you can find a county-by-county breakdown of the state’s presidential electors (part-time Coloradan Gerald Ford won the state, but Jimmy Carter won the election), as well as the number of votes for other races including Congressional, Legislative, judges, etc.

Of course, 1976 was also the year of the disastrous Big Thompson Flood.  You can read about that, and the related documents available from our library, in an earlier post.  Since then, we now have the Final Report to the Governor in our library’s digital collection.