As humans, we have houses, heaters, stoves, and warm clothes and blankets to keep us warm and fed during the winter months. But what about wildlife, who must stay warm, feed themselves, and evade predators in snow and cold temperatures? Colorado’s wildlife have developed a number of adaptations and habits that help them survive the harsh winter months. 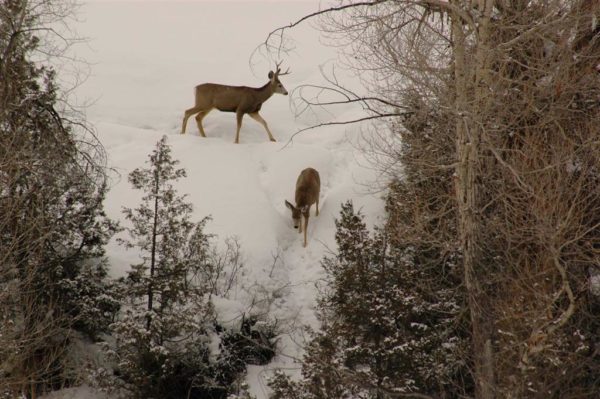 Deer, elk, and bighorn sheep live in the Colorado mountains year round, but they alternate between summer and winter ranges. During colder months, the animals move to lower elevations, often along south-facing slopes that provide more sunlight, shallower snow depths, and more food sources. With fresh grasses unavailable, big game animals change their diets during winter to feed on woody shrubs. Wildlife in Winter, a new video series from Colorado Parks & Wildlife (CPW), explains the importance of big game migration to winter ranges and how herds find enough food. The videos also remind us that feeding wildlife in winter can be harmful, both by causing problems to animals’ digestive systems and also by disrupting their normal seasonal migration patterns. 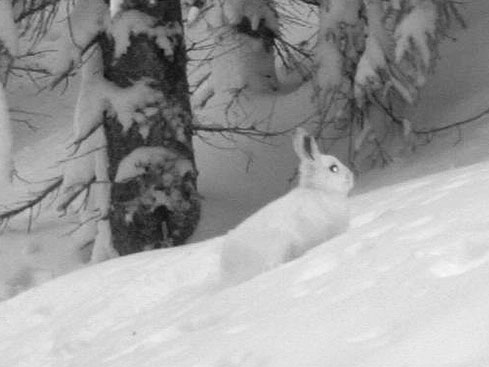 One of the most famous winter adaptations is that of the snowshoe hare, whose coat changes from brown in summer to white in winter in order to provide camouflage in the snow. Another new CPW video series offer images of how snowshoe hares blend in with their surroundings, and how the agency is tracking and collaring these interesting animals so we can learn more about their habits.

Another small mammal that changes to a white winter coat is the ermine. Ermines are mustelids (members of the weasel family) that live in the alpine tundra. Unlike snowshoe hares, whose white fur helps them hide from predators, ermine are predators themselves – so they use their adaptation to help them stay undetected.

Some bird species migrate during the winter months, but others remain here. If you live in the Denver metropolitan area, some of the most common birds you will see during the winter months include Canada geese. Some populations of Canada geese live in Colorado all year, as you probably know if you use urban parks during the summer. But others migrate to Colorado from places further north that experience harsher winters than we have here.  Another bird species that spends the winter in Colorado is the Junco, which includes several sub-species. Juncos are small, grey birds that forage for food on or near the ground. They are a common sight at bird feeders and in shrubby areas during the winter. 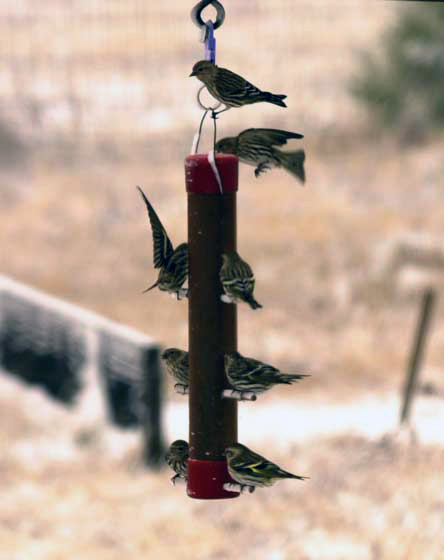 Birds, too, have many physical adaptations that allow them to survive the winter cold. They fluff up their feathers, which allows them to stay more insulated. Additionally, smaller birds keep warm at night by slowing their metabolic rate to conserve energy, and sleeping huddled together to share body heat.

Birds are one of the few types of wildlife that can benefit from being fed by humans during winter months, provided that they are fed responsibly with healthy, correct foods and that feeders and birdhouses are cleaned regularly to prevent disease. For more on feeding birds in winter, see my previous blog post.

Some species, such as black bears, hibernate during the winter. Their metabolism and body temperatures drop and they enter a sleep-like state for about 200 days. Other animals that hibernate include garter snakes, bats, and some rodents such as marmots and chipmunks. Others, like pocket gophers, remain active all winter but burrow deep below ground, where they are far away from cold and snow. For more information, see the brochures Small Mammals in Winter and Tales of Winter.