Have you ever seen a tropical bird flying around Denver, or caught a strange-looking fish in a mountain stream?  It happens — but it shouldn’t.  Sometimes people think releasing an animal back into the wild is a kind way of letting it go free — but this is far from the truth.  In fact, when you release a pet or laboratory specimen into the wild, it generally is either not adapted for Colorado’s climate, or never learned the necessary skills to fend for itself, or both.  Further, non-native species can harm the ecosystem in a variety of ways, from spreading foreign parasites and diseases to altering native species’ gene pools.  Therefore, if you have an unwanted animal, consider donating it to a shelter (if a pet animal) or see about donating it to a classroom or a local museum or aquarium.  You can find out more information about the hazards of releasing non-native species into the wild by visiting the Colorado Division of Wildlife’s Don’t Turn it Loose webpage.  You can also search our library’s web catalog for further information on non-native and invasive species and their effects. 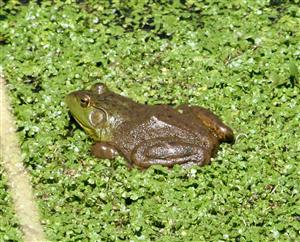 The bullfrog is an example of a non-native species that has been introduced into Colorado.  It preys on other frogs and has reduced populations of Colorado’s native leopard frog.  (Courtesy Colorado Parks and Wildlife.)
ecologyenvironmentwildlife
Facebook Twitter Pinterest LinkedIn