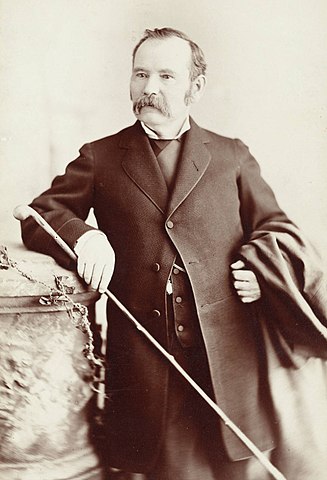 John L. Routt has the distinction of being both the final territorial governor of Colorado as well as the first statehood governor. His political career also included a term as Denver mayor.

Born in 1826, Routt grew up in Illinois, where he began his political career as an alderman and county sheriff. Routt served with the 94th Illinois Volunteers in the Civil War, then went home to resume his political career. In March 1875, President Grant – also from Illinois – appointed Routt as the governor of Colorado Territory.

Colorado became a state a year and a half into Routt’s term, and he was elected the state’s first governor. Routt, a Republican, defeated Democrat Bela Hughes for the seat. After serving one term, Routt gave up public service for a mining career — but he couldn’t stay away from politics for long. Routt served one term as Denver mayor from 1883 to 1885, then ran for the U.S. Senate and lost. He ran for governor a second time and served one term, 1891-93. (At that time governor’s terms were two years instead of four).

One of Routt’s claims to fame is his strong support of female suffrage. In 1893 Colorado became the first state to give women the right to vote. (Wyoming had actually been first, but they were a territory, not a state). Routt was out of office by that time, but his wife, Eliza Pickrell Routt, became the state’s first woman to register to vote. Routt had also arranged for Susan B. Anthony to visit Colorado.

It has been said that when Routt ran for his first term as statehood governor, he did so without making a single campaign speech. Once in office, however, Routt did deliver a very lengthy inaugural address, which you can read online from our library. His inaugural speech from his second term in 1891 is also available online. Two additional speeches – what we would refer to today as “state of the state” speeches – from 1879 and 1893 are available to view in our library. You can also find more information on Routt at the Colorado State Archives.

After his governorship, Routt continued to serve the state as a member of the Board of Capitol Managers, which planned the new State Capitol. Routt also took up cattle ranching. He died in 1907 and is buried in Denver’s Riverside Cemetery. Routt County is named for him.