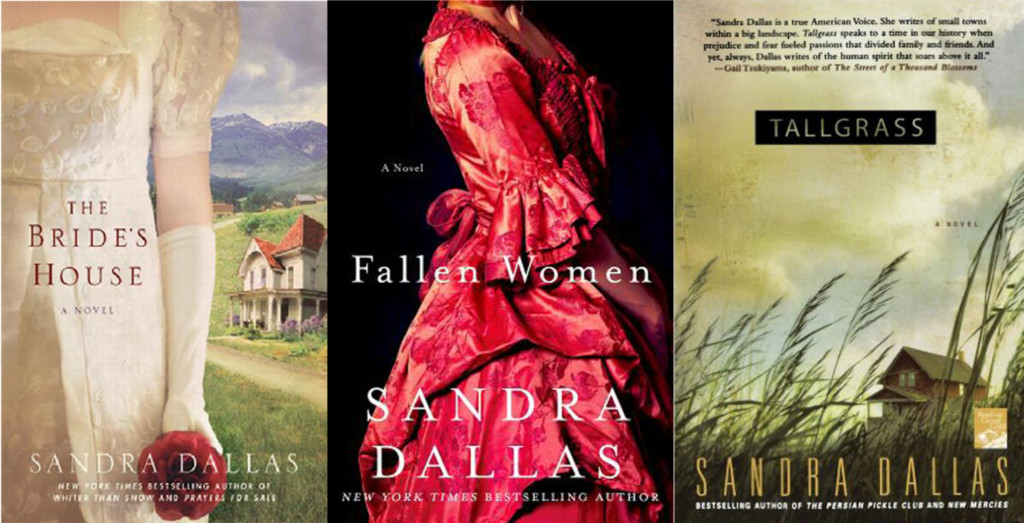 Sandra Dallas is a Colorado author that splits her time between Denver and Georgetown, where she owns a lovely late 1880’s home that she and her husband have refurbished. In fact, it was the inspiration for her novel The Bride’s House, which is the newest Sandra Dallas title to join our collection’s family. This now brings the total of Sandra Dallas titles to three and all of them take place here in Colorado!

It’s 1880, and for Nealie Bent, seventeen, the splendid Victorian house under construction in Georgetown, Colorado, is like a fairy tale come to life. She dreams of living in “the Bride’s House,” as she calls it, with Will Spaulding, the young entrepreneur sent from the East by his grandfather to learn about the mining business. Will is not the only one who courts Nealie. Charlie Dumas, a miner who lacks Will’s polish, wants to marry the hired girl, too, and although Nealie rebuffs him, Charlie refuses to give up. Ultimately, Nealie must deal with lies, secrets, and heartache before choosing the man who will give her the Bride’s House. For the motherless Pearl, growing up in the Bride’s House is akin to being raised in a mausoleum. Her father, robbed of the life he envisioned with Nealie, has fashioned the house into a shrine to the woman he loved. He keeps his daughter close. When the enterprising young Frank Curry comes along and asks for Pearl’s hand in marriage, Pearl’s father sabotages the union. But Pearl has inherited her mother’s tenacity of heart, and her father underestimates the lengths to which the women in the Bride’s House will go for love. Susan is the latest in the line of strong and willful women in the Bride’s House. She’s proud of the women who came before her. Their legacy and the Bride’s House’s secrets force Susan to question what she wants and who she loves.

It is the spring of 1885 and wealthy New York socialite Beret Osmundsen has been estranged from her younger sister, Lillie, for a year when she gets word from her aunt and uncle that Lillie has died suddenly in Denver. What they do not tell her is that Lillie had become a prostitute and was brutally murdered in the brothel where she had been living. When Beret discovers the sordid truth of Lillie’s death, she makes her way to Denver, determined to find her sister’s murderer. Detective Mick McCauley may not want her involved in the case, but Beret is determined, and the investigation soon takes her from the dangerous, seedy underworld of Denver’s tenderloin to the highest levels of Denver society. Along the way, Beret not only learns the depths of Lillie’s depravity, but also exposes the sinister side of Gilded Age ambition in the process.

During Word War II, a family finds life turned upside down when the government opens a Japanese internment camp in their small Colorado town. After a young girl is murdered, all eyes (and suspicions) turn to the newcomers, the interlopers, the strangers.

This is her town as Rennie Stroud has never seen it before. She has just turned thirteen and, until this time, life has pretty much been what her father told her it should be: predictable and fair. But now the winds of change are coming and, with them, a shift in her perspective. And Rennie will discover secrets that can destroy even the most sacred things.

The thing I’m writing now, I have various characters, and all of a sudden, out of nowhere, this couple dies. And they have a daughter. …I thought, ‘OK, we have to do something with the daughter’ … then I realized she’s not really their daughter. She has her own story. And she’s become the most interesting character. She was this throwaway character that I didn’t even conceive of before I started writing her into it, and now she’s become very important in this book. -Sandra Dallas