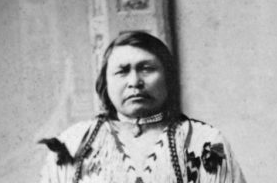 Chief Ouray was born November 13, 1833 in Taos, New Mexico to a Jicarilla Apache man and a Ute woman. On the night he was born there was a meteor shower. This event apparently influenced his parents to name him Ouray, which means “The Arrow.” Interestingly, Ouray was not raised by his parents, but was raised by a Spanish family in the area. In this environment he learned to speak Spanish and English, and it wasn’t until later in life that he learned to speak his native tongues, Ute and Apache. Ouray was still in contact with his biological parents, and at seventeen moved to Colorado where they had relocated.  His father, despite being Apache, was chief of the Uncompahgre band of the Utes. During the next decade Ouray primarily worked as a sheepherder and married a woman name Black Water who bore him a son. Black Water tragically died and Ouray remarried in 1859, to a Kiowa Apache woman named Chipeta who grew up with the Utes, . Ouray and Chipeta were extremely fond of one another and formed a strong partnership.

Ouray, however, fell ill with a kidney disease and died soon after he returned to Colorado from Washington.[footnote]“Particulars of the Great Chiefs Last Illness.” Leadville Weekly Herald, September 18, 1880. CHNC[/footnote]  It was Chipeta, Ouray’s wife, who would accompany her people to their new reservation in Utah and who would continue to fight for the reinstatement of their ancestral land in Colorado.