The Colorado State Library is pleased to announce the recent addition of three new historic newspaper titles to the Colorado Historic Newspapers Collection (CHNC).  CHNC and its partners have recently added the Erie News (1903-1906), the Palisade Tribune (1949-1955) and the Aurora Democrat (1912-1919)

The Erie News, added to CHNC by the Erie Historical Society, was published by Clyde L. Stanley between 1903 and 1906.  Stanley also known as the “Boy Publisher” published the first addition of the Erie News when he was just 16 years old.  He would go on to have a long career in newspapers in Colorado, publishing the Lafayette News, the Keota News and the Pawnee Herald.

The Palisade Tribune, added to CHNC by the Palisade Historical Society, published its first issue in June 1903 and was published until 2014.  The Tribune, a weekly newspaper, was founded and first published by Clinton H. Martin who gave his newspaper the motto “Push for Palisade.”  The paper changed hands many times over the years and published its last edition on March 13, 2014.  The Historical Society was recently awarded a grant from the Colorado Historical Records Advisory Board to digitize more years of the Tribune.  These new years will be available in CHNC this September. 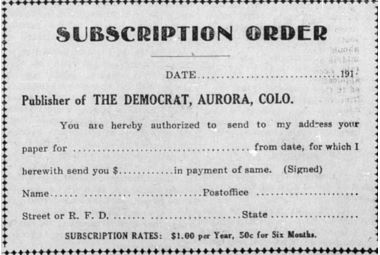 The Aurora Democrat, added to CHNC by the Aurora History Museum, was published between 1909 and 1955.  The paper was started by brothers Raphael Gwynn and H. M. Gwynn.  The Democrat, representing Arapahoe County, was published alongside of a companion paper the Adams County News, representing Adams County.  The two papers, both weeklies, eventually merged in 1955.  The Aurora History Museum also received a grant from the Colorado Historical Records Advisory Board to digitize more years of the Democrat.  These years will also be available in September.

We hope you enjoy the new content.  Congratulations to our partners!  Click here for more information about grant funding opportunities for newspaper digitization.