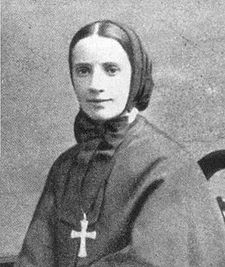 Why Important: The First American Saint

Francesca Saverio Cabrini was born in Sant’Angelo Lodigiano Lombardy, Italy, one of eleven children. She became a nun in 1877 in Italy and in 1880 founded the Missionary Sisters of the Sacred Heart of Jesus with six other sisters.

In 1889 Pope Leo XIII sent Cabrini to New York to help the many poor Italian immigrants there.

She became a U.S. citizen and went on to found sixty-seven missionary institutions around the country, including one in Golden, Colorado, the Queen of Heaven Orphanage Summer Camp.[footnote]“Colorado State News.” Yuma Pioneer, June 25, 1915. CHNC[/footnote]

Mother Cabrini came to Colorado in 1902 to visit Italian immigrant mine workers. She loved the mountains and purchased the Lookout Mountain site in 1910. There, the Sisters of the Sacred Heart built a convent and farmed, and orphan girls visited the site as a summer camp. A stairway traces the path that Mother Cabrini walked up the mountain. The Shrine also includes a 22-ft high statue of Jesus.

Mother Cabrini died in 1917 in Chicago.[footnote]“State News in Brief.” Colorado Transcript, January 3, 1918. CHNC[/footnote] She was canonized a saint in 1946 and is now known as the patron saint of immigrants.