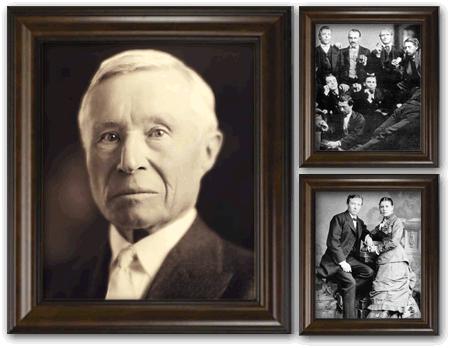 Why Important: Adolph Coors founded the very successful Coors Brewing Company. His success through hard work and ingenuity is a good example of the American Dream.

Adolph Herrman Kohrs, who later changed his surname to Coors, was born in Germany in 1847. To help his family earn money, Coors worked as a printer’s assistant when he was young. Coors became an apprentice at a brewery in Germany when he was fifteen. As an apprentice, he learned how to make beer from the master brewer and how to run a successful brewery.

When he was twenty-one years old, Coors immigrated to the United States. He stowed away on a ship headed to Baltimore, Maryland. When he arrived, he had no money and could not speak any English. He decided to head West in search of new opportunities.

In 1872 Coors came to Denver, Colorado. He worked as a gardener and a manager of a bottle plant six days a week. Coors worked hard and saved his money hoping to open his own brewery. His hard work had paid off by 1873. Coors went into business with Jacob Schueler. They bought an old tannery building and opened the Golden Brewery. Coors took over as owner of the company in 1880 and renamed it Coors Golden Brewery.[footnote]Colorado Transcript, October 6, 1880. CHNC[/footnote] He had dreamed of brewing the “perfect beer” and had widespread success with the beer he brewed in Golden.

Coors married Louisa Weber in 1879 and they had six children. In the late 1800s, Coors built a home on the grounds of the brewery. During the Prohibition years when alcohol was illegal, the Coors Company stayed in business by making cement, porcelain, and malted milk instead of beer.[footnote]“Malted Milk Plant Soon to Operate.” Colorado Transcript, February 1, 1917. CHNC[/footnote] Coors also created a non-alcoholic beer called Mannah.[footnote]

Coors died in Virginia Beach, Virginia on June 5, 1929.[footnote]“Colorado State News.” Aspen Daily Times, June 14, 1929. CHNC[/footnote] His sons took over the business. Although Coors beer was only sold west of the Mississippi River, it was well known all over the county. People drove across the country to buy cases to take home. Former President Gerald Ford was said to have loaded cases of Coors beer onto Air Force One. The Coors brewery continues to be one of the most successful in the country. It is the largest single-site brewery in the world, producing more than 17 million barrels of beer each year.