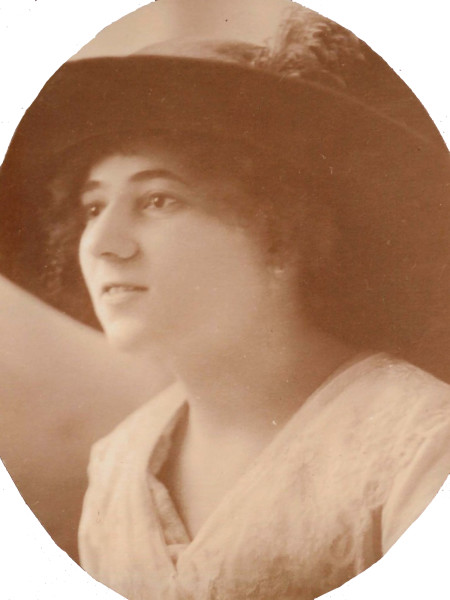 Why Important: Ferretti was a female entrepreneur in the early twentieth century. She established a successful millinery business. By the 1940s, Ferretti was a nationally known hatmaker.

Kate Ferretti was born on January 3, 1891 in Denver, Colorado. She was born with the name Henrietta Malnati. Her older brother, Carl, told her first grade teacher that her name was Kate and the nickname stuck. Ferretti’s parents, Henry and Louisa, were immigrants from Italy. Her father was a granite cutter. He found work in Denver building the Colorado State Capitol building.

Ferretti got her first job at the Denver Golden Eagle store where she learned the trade of millinery. Millinery is the business of making hats. After two years, she had learned a lot. She went to work at Denver Dry Goods and her hat making skills became very sought after.1Svensk-Amerikanska Western, August 3, 1916. CHNC Eventually, she began making hats for the Villa de Paris store. Villa de Paris was a store that catered to Denver’s high society.

Here Ferretti would make hats for many of Denver’s influential women. She even made hats for Molly Brown! While working at Villa de Paris, she met Giocomo Ferretti and married him on April 10, 1917.

Ferretti saw an opportunity to become the preferred milliner for Denver’s wealthiest women. She established her own business, working from her home. Eventually, she was able to open her own shop in North Denver’s “Little Italy” area. Her wealthy clients would send their chauffeured cars from the Capitol Hill area to North Denver to pick up their hats. She traveled to Paris twice a year for materials and traveled to customers in Utah, Texas, and New Mexico. Ferretti’s business thrived, as wealthy women continued to need skilled hatmakers that could tailor to their fashion needs.2“Walker-Kimball Wedding Held At Cherokee Ranch.” Douglas County News, March 20, 1958. CHNC

She was also able to expand her business. Ferretti began buying designer clothes on her trips to Europe. She would bring the clothing back to Denver to sell.

During the peak of her success, Ferretti employed at least three fulltime workers. Her daughter Ann came to work with her and learned everything there was to know about hat making. Her sons took care of the finances of the business. In 1971, Kate retired. Her children took over the business. Ferretti died in Denver in 1987.