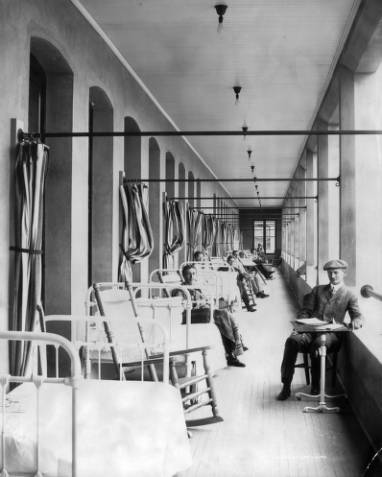 This week we use our digital documents to travel back to 1957, when the Colorado Department of Health issued a report entitled Recent Levels of Known Tuberculosis in Colorado.  At the time of this report’s publication, tuberculosis was well on the decline in Colorado — in fact, according the report, “from 1950 to 1956, the reported number of new cases of tuberculosis, among Colorado residents, per 100,000 population decreased steeply, or from 119.7 to 67.5.”  The rate of death from tuberculosis was 7.8 per 100,000 in 1956, down from 32.3 in 1945.  The report attributed this decline to “new treatment methods.”  The report predicted a 1.5 per 100,000 death rate in ten years.

Today we don’t think of tuberculosis very often — 2013 data shows that Colorado is now down to 1.4 cases per 100,000 residents, a sharp decline even from the 1950s.  Yet tuberculosis, or consumption as it was known in the last century, once affected thousands and played a major role in populating our state.  Consumptives came to Colorado for the “climate cure,” the dry air and high elevation that was considered curative of the respiratory disease.  Many tuberculars did indeed find relief from the illness here in Colorado, but medications would prove to do more for curing the disease than fresh air alone.  Much of the research on tuberculosis treatment in Colorado was done by Dr. Florence Rena Sabin, a highly respected medical researcher.  She studied tuberculosis data in Colorado in the 1940s (reported in the 1957 report) and found that incidences were higher in urban areas (having “greater opportunity for infection”); “Spanish-Americans” had the highest rates of tuberculosis among racial/ethnic groups; tuberculosis was more prevalent in males than in females; and areas of low socio-economic status had higher rates of tuberculosis.  The disease was also highest among those age 45 and older.

Although the 1957 report presents a statistical analysis and does not explain treatment methods, an article from the European Respiratory Journal explains that new medications were discovered in 1944 and 1952 that could, in combination, cure tuberculosis — consistent with the rates of decline described in the 1957 report.

For information on tuberculosis today, see the Colorado Department of Public Health and Environment’s Annual Tuberculosis Surveillance Report.  Also here at the State Publications Library we have a number of resources that delve into the history of tuberculosis in Colorado.  Resources that cover this topic include: