With the 1862 Homestead Act thousands of settlers poured into the Great Plains, and over the years cattle grazing and dryland farming destroyed the natural prairie grasses.  Around 1930, a major drought began, and without the grasses to hold it down, the prairie essentially blew away — huge dust storms covered the land like snow, blocking sunlight for days and creeping into every tiny crevice in settlers’ houses.  To make matters worse, the Dust Bowl coincided with the economic losses of the Great Depression.

By 1934 it was clear that something had to be done to protect public lands from overgrazing.  So Edward Taylor, a Colorado congressman, introduced a grazing bill.  Under Taylor’s bill — and later Act — nearly 80,000,000 acres of public lands in the West were placed under protection of the Department of the Interior through the establishment of grazing districts.  The Act also created a new federal bureau that eventually became the Bureau of Land Management. 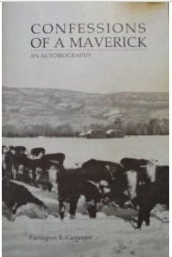 Secretary of the Interior Harold Ickes appointed a Coloradan, Farrington Carpenter, as head of the new Grazing Bureau.  Political battles led to Carpenter’s being fired in 1938.  He later served as Colorado State Director of Revenue from 1941-42.  His ranch, in Routt County near Hayden, is now held under a conservation easement from the Nature Conservancy and is open to visitors.  Carpenter’s autobiography, Confessions of a Maverick, is available for checkout from our library.

Under the Taylor Grazing Act, six grazing districts were created in Colorado, the largest being 2,099,331 acres extending from the White River National Forest and Yampa River to the Utah border.  Being a mining state, some in Colorado worried that the Act would restrict mining activities in the districts.  The Year Book of the State of Colorado, 1935-36, provided assurances that the Act would not provide any limitations on mining.  The Year Book, a biennial publication produced during the first half of the 20th century by the State Planning Commission, included facts and statistics on all matters of life and government in Colorado.  The Taylor Grazing Act is discussed in the 1935-36 book on pages 309-311.  More detail is provided in the following report, for 1937-38, when the Act had been underway for a few years.  That report included, on pages 399-402, statistical tables, financial information, and discussion of the Act and other public land issues in Colorado.