Colorado Territory had barely been established when a group of leading farmers, agriculturalists, and promoters got together and formed the Colorado Agricultural Society in 1861. Society founders included such notables as William N. Byers (Denver promoter and founder of the Rocky Mountain News), Richard Sopris (future Denver mayor), William Gilpin (territorial governor), and William Larimer (founder of Denver). 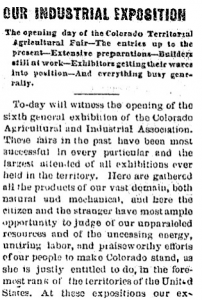 The organization was already ten years old — and Colorado hadn’t even attained statehood yet — when they kicked off their annual agricultural exhibition in Denver 146 years ago today, September 19, 1871.  In his newspaper Byers wrote that “the fair which opens to day will be the most extensive ever witnessed in Colorado.”  (You can read the full article online via the State Library’s Colorado Historic Newspapers Collection.)

The exhibition, on the eastern outskirts of the city, boasted a fairgrounds of forty acres with a mile-long racetrack and “an elegant new grandstand…with orchestra for musicians, and seats for the accommodation of 3,000 persons” — especially interesting since Denver’s entire population in 1870 was only 4,759.  The fairgrounds also included stock pens, a 2-story building with “a large and commodious dining hall,” a 150-foot circular pavilion for agricultural displays, “ladies’ and gentlemens’ saloons,” and “a large hall for minerals, fine arts and fancy goods.”  This description comes from the Agricultural Society’s biennial report and report of the exhibition, which you can view online from our library.  The document also includes a history of the Society and a report of the previous year’s (1870) exhibition, as well as the society’s annual reports for both years. Detailed “programmes” for the 1870 and 1871 exhibitions can also be found.  The lists of all of the prize winners are also included.  Mrs. H. B. Bearce must have been especially talented; she won first prize in three categories: “best worked pair slippers,” “best display bead work,” and “best embroidered chemise.”  It might have helped, though, that her husband was President of the Society!

The Colorado Agricultural Society was dissolved in 1873 and the task of promoting agriculture in Colorado went to the Colorado Industrial Association.  Smaller, local fairs such as county fairs were held in lieu of the territorial fair until 1882, when Denver constructed a huge pavilion for a major Mining and Industrial Exposition.  Although mining was the major focus of this exposition, it did include large displays devoted to agriculture and other industries.  This exposition was located near South Broadway and what is now Exposition Avenue.  It was only held for three years; a major decline in attendance at the 1884 fair spelled the demise of the exposition.  Later, in 1901, the Colorado State Fair was established in Pueblo, where it is still held every year.