The Arkansas River Compact is an agreement between the states of Colorado and Kansas to avoid disputes over water usage rights and to “equitably divide and apportion” the waters between the two states.  The agreement, signed in 1948, further specifies the use of the waters in John Martin Reservoir.  You can read a copy of the compact at the Colorado Division of Water Resources website, along with other compact documents. 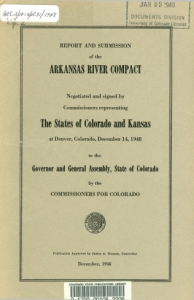 After the compact was negotiated and signed by the compact commissioners in 1948, they forwarded their recommendations to the governors and legislatures of the two states for review ratification.  Our library has digitized the report sent to the Colorado lawmakers, which you can read here.  The commission included nine members, four from each state along with a federal representative, Gen. Hans Kramer, a retired Army Corps of Engineers Officer, to serve as chair. (Read President Truman’s letter appointing Gen. Kramer to head the compact negotiations here.)  Colorado’s representatives included former state Attorney General Gail Ireland; Charles Patterson of the Colorado Water Conservation Board; Henry C. Vidal; and Harry B. Mendenhall.  The Colorado and Kansas legislatures approved the compact in 1949 and on May 13 of that year, it was approved by Congress.

The need for the Arkansas River Compact came after a long history of disputes and lawsuits between the two states.  The Colorado Water Conservation Board has put together a helpful timeline of the events leading up to the development of the compact.

For further resources on the Arkansas River, interbasin compacts, and water usage rights in Colorado, search our library’s online catalog.