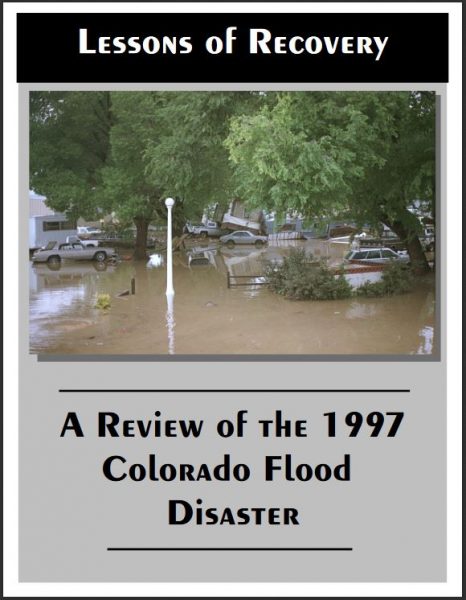 As hot and dry as it has been so far this summer, it’s hard to believe that most of Colorado’s floods — the September 2013 floods being a significant exception — occur in June and July. In our library you can find many resources on the history of flooding in Colorado. Many flood events are documented in publications available from our library. 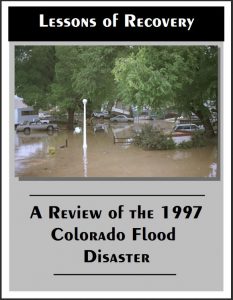 The Northern Colorado Floods of 1997
1997 was a significant year for floods in Colorado. Lessons of Recovery: A Review of the 1997 Colorado Flood Disaster provides an overview of the various floods that occurred in northern Colorado in July of that year. “In Fort Collins and in the Morgan County community of Weldona, the 1997 flood events far exceeded anything on record or in the memories of long-time residents,” noted the report, which was produced in 1999 by the state’s Office of Emergency Management. Five Fort Collins residents were killed in what is known as the Spring Creek Flood, which caused thousands of dollars in damage and even affected the CSU campus. Larimer County received the heaviest recorded rainfall in 24 hours during that flood event. See my Time Machine Tuesday post from last July for more on the flood and additional resources.

Pawnee Creek, in Logan County, also flooded during this time. CSU’s Colorado Climate Center produced a report on the rainfall for the Pawnee Creek storm. The 1997 floods are also covered in Flood of 97, an state-federal interagency hazard mitigation report, and in Colorado’s 1997 Flood Season in Review, a publication of the Colorado Water Conservation Board (CWCB).

A little over a month earlier, on June 2, Weld County had experienced significant flooding. The Colorado Water Conservation Board produced an Engineering Technical Report on this event.

1996 Floods
On July 12, 1996, residents near Buffalo Creek in western Jefferson County experienced a disastrous flood exacerbated by the denuded landscape resulting from a recent forest fire. Two people were killed in the flood. For information see The Buffalo Creek Flash Flood of 1996 and Emergency Response, Flood Hazard Mitigation, and Flood Hazard Awareness for Residents of Buffalo Creek, Colorado.

Just three days before, on July 9, southeastern Pueblo experienced a flood at Dry Creek basin, brought on by a heavy thunderstorm. The floodwaters circumvented a levee downstream of a rail crossing, damaging several homes. The Colorado Water Conservation Board’s review of the flood can be accessed from our library.

The Big Thompson Flood
The deadliest flood in Colorado history, the Big Thompson Flood, began on the night of July 31, 1976. The disaster claimed the lives of 144 people and caused over $35 million in damages, according to the Fort Collins Coloradoan. Our library collection includes numerous reports and studies on this flood. Some of the reports that have been digitized and are available online include:

Our library collection contains many more documents about Colorado flooding than just those listed here. Search our online catalog for more resources.

Do you have memories of these or other Colorado floods? Share your reminiscences in the comments section below.