In the fall of 1927, the University of Colorado announced the topic for that year’s High School Debating League, which the university was sponsoring. That school year, high school students from all over Colorado would research and debate the merits of the proposed Boulder Dam (known since 1947 as the Hoover Dam).

Construction of a dam on the Colorado River had first been recommended to Congress in 1922. Beginning that year two California congressmen, Phil Swing and Hiram Johnson, sponsored a series of bills to authorize construction of the dam, but received little support due to complicated water rights issues and the great expense of the project. That same year, Colorado’s Delph Carpenter negotiated the seven-state Colorado River Compact, which divided the waters between the upper and lower basin states. By 1927-28, Swing and Johnson’s latest efforts were getting more traction than their earlier bills. However, many in Colorado expressed concerns that water rights would favor California over Colorado, as well as how a project of such magnitude would be engineered. The university even set up a “fact-finding committee” to study the issue in conjunction with the debates.

Such was the state of events when the University released its announcement about that year’s high school debate topic. The debate committee was aware that their chosen topic was an evolving situation, so they stressed the importance of keeping current on the issue. But they believed it was a “complex, intricate, and … fresh” topic that “afforded so many alluring byways and cross-paths.” 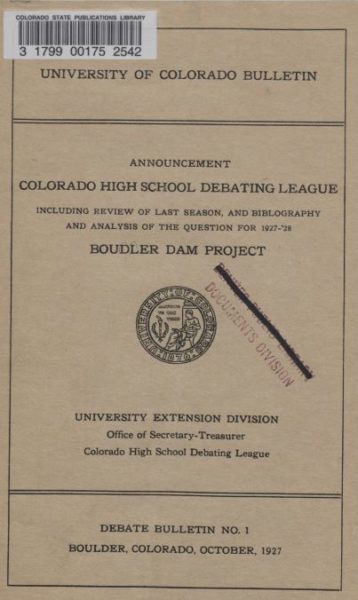 To help students prepare their arguments for or against the dam, two librarians at the University of Colorado library assembled a “history and analysis” of the project, along with a very extensive bibliography. These items were included in the announcement; therefore, this publication, which has recently been digitized by our library, is of especial interest not just for its information about the high school debate league, but as a detailed listing of documents and records from the time period regarding the development of the dam — a valuable resource for anyone looking for a listing of primary sources about the dam’s history.

The Swing-Johnson bill authorizing the dam was passed by Congress and signed by President Coolidge in December 1928. The dam was constructed between 1931 and 1936, providing hundreds of jobs during the Great Depression.