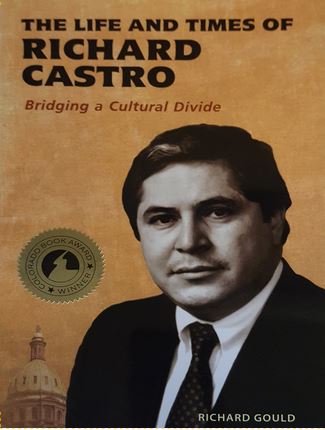 When Richard M. “Rich” Castro began his term in the state House of Representatives in 1975, he was just 25 years old – one of the youngest legislators ever to have served in the Colorado General Assembly. Castro had grown up in the ethnically-mixed Curtis Park area of Denver. In the late 1960s he attended Metropolitan State College. He moved to Denver’s west side, at that time a primarily low-income Hispanic neighborhood, where he formed the West Side Coalition and began to advocate for civil and human rights. He represented Denver in the State Legislature from 1975 to 1983; he also served on the Denver School Board and worked closely with Mayor Federico Peña during that administration. He also taught in the Chicana and Chicano Studies Department of his alma mater.

One of the issues Castro most strongly advocated for was educational rights for minorities. In 1981 he spoke at the Conference on Housing and School Desegregation Policies in Metro Denver, sponsored by the University of Colorado at Denver. Castro’s remarks, “Neighborhood Identity and School Desegregation,” can be read in the conference report, which has been digitized by our library.

Rich Castro died of an aneurysm in 1991. He was just 44 years old. In their memorial, the General Assembly praised Castro for his efforts in “meeting the educational needs of culturally diverse groups in the state,” and his fight “not only to eliminate discrimination against Hispanics, but to eliminate discrimination against all persons.” Castro was also memorialized with a sculptured portrait in the State Capitol, created by artist Emanuel Martinez.

History Colorado and the University Press of Colorado have published a full-length biography on Castro, The Life and Times of Richard Castro: Bridging a Cultural Divide, which you can check out from our library. The biography “traces Castro’s path from the streets of west Denver to the chambers of the state capitol. It also traces a community’s coming of age—an event that transformed politics and society in Colorado and throughout the West.”