Our library collection contains many state reports about public welfare in the Great Depression.  Among these is a report from 1939, addressed to the Governor and State Legislature, regarding corrections and institutions.  The report examines “the functions, the internal organization, and the more important procedures of the welfare institutions of the state.”  These institutions included the Colorado State Hospital; the Colorado Psychopathic Hospital; the two branches of the State Home and Training School for Mental Defectives; the Colorado General Hospital; the State Reformatory; the State Industrial Schools, which included one for boys and one for girls; the State Penitentiary; the State Home for Dependent and Neglected Children; and the Soldier’s and Sailor’s Home.  The report details results of a study and recommendations to state leadership regarding state oversight of these institutions.

Researchers can learn more about all of the institutions examined in the 1939 report by consulting the many reports on each individual institution, available from our library.  Among those accessible online are 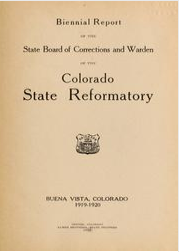 There are many more reports on Colorado’s early state institutions available for viewing in print from our library.  Search our library’s online catalog for titles.