The Highway Beautification Act, signed by President Lyndon B. Johnson on October 22, 1965, charged states with controlling outdoor advertising — particularly billboards — along interstates and federally-funded highways.  In response to the Act, over the next several years, Colorado passed several state laws that would control outdoor advertising adjacent to highways, as well as other beautification measures such as control of of junkyards located alongside highways.

Colorado had enacted controls on roadside advertising as early as 1937, but following 1965’s Highway Beautification Act, the Colorado Legislature passed Senate Bill 6 in 1966, “prohibit[ing] the erection of advertising devices adjacent to the interstate and primary highway systems of this state.”  Eventually, legislation allowed for some advertising in urban areas; special permits from the Colorado Department of Transportation; and other exceptions.  Colorado’s laws, viewable in digital form via the Colorado Session Laws, include some exceptions added in 1967; the issue of political campaign signs in 1970; 1971 laws regarding permits and exceptions; and further updates to the law in 1979.

Today, the Highway Beautification Act is still on the books, and violations of the Act can result of loss of federal funding for the state.  For information on how this half-century-old legislation still applies today, see the Colorado Department of Transportation’s Outdoor Advertising Program Reference Guide and Outdoor Advertising Manual, both published in 2015 and available for viewing from our library. 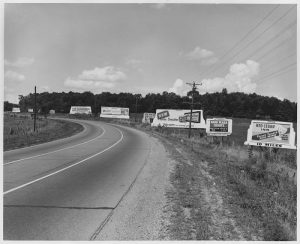 The Highway Beautification Act came in response to scenes like this one in 1950s Missouri.  Photo courtesy National Archives and Records Administration.