This year, Florissant Fossil Beds National Monument is celebrating its 50th anniversary. Since the nineteenth century, scientists have regarded the Florissant beds as some of the richest deposits of fossils in the United States. 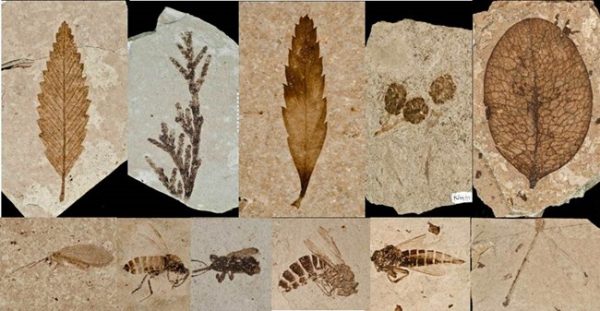 35 million years ago, a large lake covered much of the area that is now the monument. Because the area had a warm, temperate climate, plants and animal species were quite different from what we find in Colorado today. Some of the subtropical plants and insects are related to species only found in Asia and Africa today, while many others are extinct. Yet record of these species are preserved in the incredible fossil shales of the former lakebed. The fossils were created when volcanic eruptions caused ash to form layers of sediments, which  preserved vegetation and insects — as well as small vertebrates like fish, birds, and rodents — as fossils.

In the mid-nineteenth century, homesteaders began moving to the area, and some of them began collecting the fossils. Scientists soon followed. One of the most important was Theodore D. A. Cockerell (1866-1948), a professor of zoology and entomology at the University of Colorado in Boulder. He was one of the founders of the school’s Museum of Natural History. From 1906 to 1908, Cockerell led several fossil expeditions to the Florissant site. His expeditions were sponsored by the American Museum of Natural History, Yale University, and the British Museum, so each of those museums has Florissant fossils in its collection, as does the CU museum. In 1927, Cockerell authored Zoology of Colorado, published by the University of Colorado as part of its Semicentennial Series. This book has recently been digitized and made available online by our library. In it Cockerell included a great deal of information about his and other early scientists’ study of the Florissant fossils and what they tell us about prehistoric life in Colorado. The book also includes several illustrations of Florissant fossils. Information on Florissant can also be found in two other Semicentennial Series titles, Geology and Natural Resources of Colorado and Colorado Plant Life, which have also been digitized by our library. You can read more about T. D. A. Cockerell in a biography from University Press of Colorado, The American Cockerell: A Naturalist’s Life, available for checkout from our library and on Prospector.

In our library you can also find additional, and more recent, resources on the geology and biology of the Florissant area, including Florissant Fossil Beds National Monument Vascular Plant Inventory, as well as various geologic maps of Teller County and nearby counties.

Florissant Fossil Beds got its name from the nearby town of Florissant, which was named after the town founder’s hometown of Florissant, Missouri. For about a century, the fossil beds area had belonged to ranchers and homesteaders. (Visitors can tour the Hornbek homestead at the monument site to learn about the area’s more recent inhabitants.) In 1969, however, the fossils were threatened when developers began buying the land in order to construct housing developments. In what became one of the nation’s first environmental lawsuits, the advocacy group Defenders of Florissant — represented by future Colorado governor Dick Lamm — took the developers to court while Congress debated declaring the area a monument. Congress recognized the importance of the area, and on August 20, 1969, Florissant Fossil Beds was officially designated a national monument. Check the monument’s website for a list of anniversary celebrations and events that will be taking place throughout the spring and summer.