In 1917, it cost a yearly average of $69.00 per pupil to educate Colorado’s public school students.  A century later, that number is up to $9,363 per pupil, according to statistics from the Colorado Department of Education.

A wealth of statistics on the funding of Colorado public schools in the early decades of the twentieth century, such as the 1917 figure above, can be found in the 1930 publication Cost of Public Education from Viewpoint of Agriculture in Larimer County, Colorado.  This report, published by the Colorado Agricultural College (now CSU)’s Agricultural Experiment Station, is available online from our library.  Although the focus of the report is on Larimer County, and especially on how public school taxes affected farmers — who in 1930 were already suffering the effects of the Depression and the Dust Bowl — the report provides many statistical comparisons with the state as a whole, so this report can be very useful to researchers beyond just those looking at farm economics or at Larimer County.

For researchers studying Colorado education history, this report is also useful to compare against other state reports.  G. S. Klemmedson, the author of the 1930 report, notes that in his research he “found many errors in published records and even in the original records which were used as a basis of study.  This was especially true of bonded indebtedness and tax levy figures. Information obtained from the State Superintendent of Schools did not agree with figures obtained from the Colorado State Tax Commission or with those obtained from the State Board of Immigration.” Therefore, this publication is helpful in reconciling the figures presented by the other agencies, whose reports you can also find in our library.  These include the Biennial Report of the Superintendent of Public Instruction; the Annual Report of the Colorado Tax Commission; and the State Board of Immigration’s Year Book of the State of Colorado. 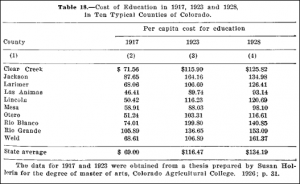 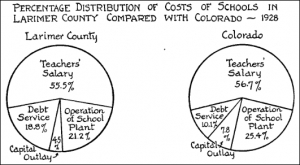 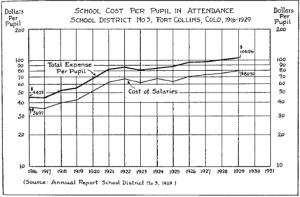 Examples of some of the statistical diagrams in the 1930 Cost of Education report.