It was the automobile age…postwar prosperity, new technologies, mass production, and innovations in design meant that cars were selling at a fast rate. It was also the age of suburbanization. White, middle-class families were fleeing the cities for the suburbs, which meant that taking the bus or streetcar was no longer feasible. The baby boom, too, increased the demand for vehicles. Owning a car — or two — was no longer seen as a luxury. With the flight to the suburbs, urban areas sought a way to attract people back to the city. Denver undertook a massive urban renewal project, declaring about 10% of the city to be “blighted” and demolishing large swaths of what we now call Lower Downtown in the name of progress. Planners also sought to lure people back into the city through a network of proposed freeways.

One of these was the Columbine Freeway, proposed in 1968-69. It would run from Bowles Avenue in Littleton on up north through Denver, meeting up with I-25 (then called the Valley Highway) and continuing up to Park Avenue West and then meeting I-70 at Pecos. The southern part of the route was very similar to what would eventually be built as South Santa Fe Drive. But once the Columbine Freeway made it up close to I-25 and Broadway, that’s where things get interesting. The freeway would cut a swath through the Baker neighborhood, West Washington Park, and Capitol Hill, with Downing Street becoming part of the freeway.

The Colorado Department of Highways’ plans for the new freeway can be found in The Columbine Freeway Route Location & Feasibility Study, which has recently been digitized by our library. This particular study focuses mainly on the southern part of the route, including an artist’s rendering of some of the proposed interchanges:

The Columbine Freeway was just one of a number of proposed freeways through Denver that were never built. The Skyline Freeway would have cut a diagonal from Morrison to Commerce City, including a stretch along Blake Street that would have leveled much of LoDo. Union Station was in the highway’s path, and Coors Field, the Pepsi Center, and other buildings we know today would never have been built. Another proposed freeway, the Mountain Freeway, cut a diagonal from 6th and Santa Fe to Alameda and Broadway, connecting with the Columbine Freeway. From there, Alameda headed east would become a freeway. Hampden east through Englewood would have also become a freeway, as would Quebec running north and south between I-25 and I-70. A map of proposed routes is included in the Columbine report: 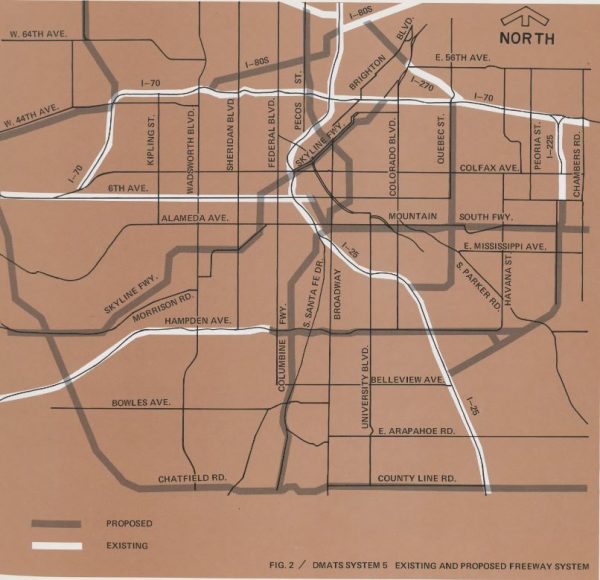 About a decade after the Columbine Freeway proposal, US 85 (South Santa Fe Drive) was constructed to provide a link from the Littleton area to Denver. C-470, parts of which can be seen in the map of proposed routes, was also completed. Plans for the remaining routes were abandoned, with their routes continuing as neighborhood streets to this day. The irony of these proposed routes is they all provided easy ways to get downtown — but not much of downtown would have been left!