160 years ago, in December 1858, about fifty settlers gathered for Denver’s first Christmas celebration. Among the revelers was General William Larimer, Denver’s founder. Lured by the prospect of gold, Larimer and his party had reached Cherry Creek and the South Platte just a month earlier. There they found two towns, Auraria and St. Charles, already staked out. The St. Charles town company had made the mistake of leaving their camp to head back east for the winter, so Larimer jumped their claim – according to legend, plying the guard with liquor – and called the new town Denver City. He chose the name to flatter James Denver, governor of Kansas Territory, of which the town site was then a part. Larimer didn’t realize, however, that Denver had retired as governor a few weeks before. 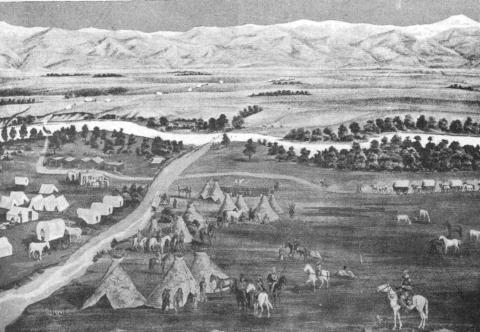 Other gold rushers came to the new town, and the settlers put together a committee to plan the town’s first Christmas celebration. The guests included E.P. Stout and S.S. Curtis who, like their friend Larimer, each have downtown Denver streets named for them. There were songs and speeches, but the highlight of that first Denver Christmas was the dinner. The settlers feasted on every kind of wild game imaginable, including some that are hard to imagine (“grizzly bear a la mode”?). They also had potatoes, beans, rice, vegetables, raisins, nuts, “prickley pear,” nine different kinds of pie, and a “wine list” that included everything from champagne to Taos lightning. The menu was recorded by A.O. McGrew, who sent the Omaha Times a colorful description of the festivities. In 1937, the Colorado Historical Society re-published the article in their Colorado Magazine, which you can now read online.

You can read more about William Larimer and the founding of Denver in the University Press of Colorado titles Colorado: A History of the Centennial State and Denver: Mining Camp to Metropolis, available for checkout from our library.

The State Publications Library wishes you and yours a happy holiday season! (Even if grizzly bear isn’t on the menu).