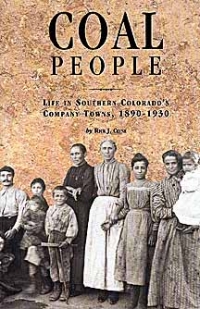 While Colorado was founded on gold and silver, coal mining became the state’s most significant mining industry by the turn of the 20th century.  The State of Colorado had a designated Inspector of Coal Mines, and each year he issued a report to the governor.  The Annual Report of the State Inspector of Coal Mines is a valuable primary source for anyone researching Colorado’s coal mining history.  The reports, issued from the 1890s to the 1960s, show the development of the industry in the state as well as the labor struggles, economics, and operations of the mines.  The most poignant aspect of the reports, however, are the lists of fatalities — which also makes these reports excellent resources for geneaologists.  The reports offer not only the names of the deceased from that year, but also their ethnicity/country of origin (many were European or Mexican immigrants), age, years of experience in the mines, marital status, number of children, name of employer, and a description of what caused the fatality.  Fatalities occurred at a rate of several per month in the early decades of the 20th century.

For further reading about life in Colorado’s coal towns, check out Coal People:  Life in Southern Colorado’s Company Towns, 1890-1930, a publication of the Colorado Historical Society available from our library.