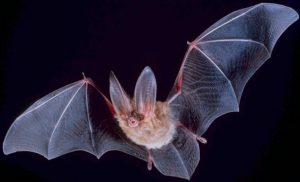 Fifteen years ago the Colorado Division of Wildlife and the CSU Natural Heritage Program conducted a survey of bats living in Colorado caves.  According to the report of the study, which you can read online via our library, twelve of Colorado’s eighteen species of bats use caves and abandoned mines at least part of the year in Colorado. Corynorhinus townsendii, or Townsend’s Big-Eared Bat, were the most frequently encountered species, typically at elevations above 6,122 feet. Townsend’s bats are officially on Colorado’s Threatened and Endangered Species list, and other bat species are also threatened due to habitat loss and wind energy development, so it is quite likely that populations have dropped since the 2002 cave study.

If you’re interested in viewing bats, the study contains a list of caves where bats were found (including some spookily named caves like Groaning Cave, Scorpion Cave, and Fixin-to-Die Cave).  Note that some of these caves may be on private property, so do your homework before setting out on any spelunking expeditions.

This is also National Bat Week.  Colorado Parks & Wildlife has put together a fun webpage with videos and facts about bats.