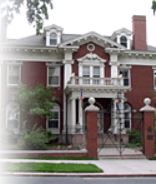 The Colorado governor’s mansion, officially named the Governor’s Residence at the Boettcher Mansion, is the “White House” of Colorado.  It is the official residence for Colorado governors as well as the site of many official state functions.  (Where it differs from the White House, however, is that the governor does not have his office there — his office is in the State Capitol).

The 1907-08 mansion is a showplace filled with furnishings and artifacts relating to Colorado and to the Boettcher family, who offered the mansion to the State in 1959.  That year, the Legislature split on whether to accept the mansion, and the gift was initially rejected and would have been torn down if Governor Stephen L.R. McNichols hadn’t stepped in at the last minute to accept the gift from the Boettcher Foundation.  The McNichols family moved into the mansion in 1961.

You can read about the history of the mansion (and see some wonderful photographs) in the book Queen of the Hill:  The Private Life of the Colorado Governor’s Mansion, available for checkout from our library.  I also posted some basic history on the mansion in a 2007 posting; since then, the official website of the mansion has changed.  The new site contains a virtual tour of the home along with information on event scheduling and a link to the Governor’s Residence Preservation Fund site, which contains more information about the mansion and how Coloradans can get involved.