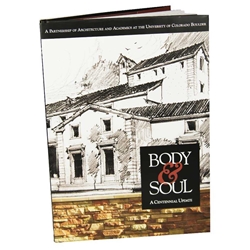 New to our library’s collection is Body & Soul: A Partnership of Architecture and Academics at the University of Colorado Boulder. Written by Campus Architect Emeritus Bill Deno, this book updates an original edition Deno and the University published in 1994 (which can also be found in our library collection). Deno calls the new edition a “centennial update” because it was published 100 years after the campus’s original architectural master plan was produced.

The building known today as “Old Main” was the campus’s first building, completed in 1876. “Buildings constructed over the next four decades represented a variety of eclectic styles with little visual cohesiveness,” Deno writes. So in 1918, CU President George Norlin decided that the campus — which he said looked like a “third rate farm” — needed a new look. His vision was for campus buildings that would provide a fitting “body” for the university’s “soul.”

Architect Charles Z. Klauder, of the Philadelphia firm Day and Klauder, was hired to oversee the new plan, which was approved in 1919. Klauder had previously designed buildings for Princeton and Wellesley, along with a 42-story tower for the University of Pittsburgh. He originally planned for the Boulder campus buildings to be of the English Collegiate Gothic style, similar to those found on many East Coast university campuses. Klauder wanted to use locally-quarried stone, however, and the more he worked with the local red sandstone, the more he realized that the color and texture didn’t fit with the style.

Instead, he developed his own new style, which Deno describes as “Tuscan vernacular” but that Klauder simply called “University of Colorado Style.” Klauder designed fifteen buildings on campus, while also incorporating older structures like the 1876 Old Main, the 1894 Hale Science Building, and others into the campus plan. He died in 1938, and in subsequent years other firms took over, producing “uninspired” buildings that led administrators to seek a return to Klauder’s vision.  In the 1960s, a new development plan was put into place. Since then, as the campus has developed, architects like Deno have worked to continue that vision.

The updated edition of Body & Soul examines not just the campus’s architectural history and design characteristics, but also examines “why it’s important the university protect the ideals of the style with every change that’s made going forward,” according to a University press release. The book includes a chapter to guide designers on how to continue to employ the characteristic style into the future, and how the style, the “body,” continues to work in harmony with “soul” of the university and its present and future ideals.

Body & Soul can be checked out directly from our library, or requested on Prospector.

1 thought on “The Architecture of the CU Boulder Campus”