A story in today’s Denver Post highlights the U.S. Dept of Game and Fish’s new effort to expand the habitat of a threatened species native to Colorado and Wyoming. The tiny Preble’s Meadow Jumping Mouse has been listed as a threatened species since 1998. The expanded habitat means that more areas will be required to maintain protections for the species. To understand the importance of this tiny creature, read the Colorado Division of Wildlife’s web story, Why Care About a Mouse? You can also read about the Colorado Dept of Transportation’s efforts to conserve the mice in their Preble’s Meadow Jumping Mouse Bulletin from 2004. Focusing on a specific location, the Colorado Natural Heritage Program (part of Colorado State University) published Conservation and Management Plan for Preble’s Meadow Jumping Mouse on the U.S. Air Force Academy in 1999. Finally, the Division of Wildlife surveyed the species in the years leading up to its listing as a threatened species. You can check out the survey reports from our library.

You can also read about Colorado’s threatened and endangered species in an Issue Brief released by the General Assembly in 2001; and in the DOW’s publication Wildlife in Danger. 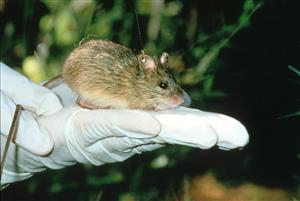 (Photo from the Colorado Division of Wildlife’s Image Gallery)