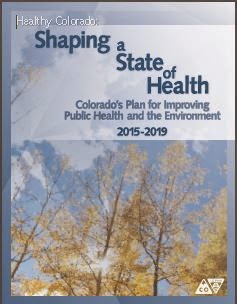 The Colorado Department of Public Health and Environment (CDPHE) has just released a new state health plan.  Entitled Healthy Colorado:  Shaping a State of Health, the report details the CDPHE’s/State of Colorado’s public health improvement efforts planned for the next five years.  According to the CDPHE’s press release, the new report brings together the suggestions outlined in “Colorado’s 10 Winnable Battles” and Governor Hickenlooper’s 2013 “State of Health” report, along with recommendations from the CDC.  It is the state’s second public health improvement plan, following the 2009 plan.

Previous plans can be accessed from our library, including: