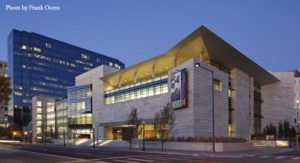 Colorado’s new history museum has been open for about a month, to great reviews.  You can read about the brand-new History Colorado Center in a new commemorative publication of that title available from our library.  The new museum at 12th and Broadway is the fourth home for the Colorado Historical Society and its museum.  They were originally located in the basement of the State Capitol; in 1912 the Society moved into a brand-new museum building at 14th and Sherman, across from the Capitol, designed by the great architect Frank Edbrooke.  That building still stands today and is used as the Legislative Services Building, although you can still see the words “Colorado State Museum” on the facade.  In the 1970s, the Historical Society built a new building at 1300 Broadway known as the Colorado Heritage Center.  We have several historical publications in our library that highlight this “new” modern building (see our web catalog for titles).  In the early 2000s, the Colorado Judicial Branch, which shared the 1300 block of Broadway with the museum, decided it needed to expand to an entire block.  So, the 1970s building was demolished, along with the judicial building next door, and the brand-new Ralph Carr Judicial Complex, which will eventually house both the Colorado Judicial Branch and the Colorado Attorney General’s staff, is currently under construction and nearing completion.  Interestingly, what goes around, comes around – the new Judicial Complex with its neoclassical architecture more resembles the style of the 1912 history museum than it does the modern, angular style of the 1970s structures!

The new Colorado History Center, a block south of the old site, features some great exhibits on different aspects of Colorado history and life, including mining, life on the eastern plains, an exhibit on the Japanese relocation camps, and much more.  New exhibits will be added as well, including a Denver exhibit coming up later this year.  For interesting information from the History Center staff on the process of moving the collection and the building of the new structure, see the last several issues of Colorado Heritage, also available from our library.