Recently Colorado Parks and Wildlife announced that they would be embarking on a $4.5 million predator control experiment aimed at reviving the state’s declining mule deer population.  The experiment calls for mountain lions and bears to be euthanized to help reduce predation of mule deer.  The plan has sparked controversy, however, over animal rights and over the question of whether the dwindling mule deer population is a result of human over-development, not predators.   You can read about the plan at CPW’s Mule Deer Strategy webpage, which includes numerous publications on the topic. 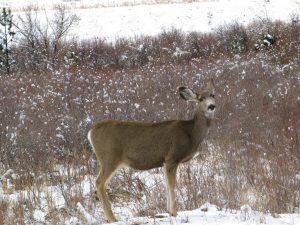 For background information on mule deer and other resources, see these publications available from our library.  Publications without hyperlinks can be checked out in print.