99 years ago this Saturday, Colorado was the scene of one of the bloodiest and most controversial incidents in the Progressive Era labor wars.  The Ludlow Massacre, April 20, 1914, occurred when Colorado National Guard troops fired on striking coal miners and their families in the Ludlow tent colony near Trinidad.  The miners, employed by John D. Rockefeller’s Colorado Fuel and Iron Company (CF&I), were part of a strike organized by the United Mine Workers of America that lasted from September 1913 to November 1914.  One of the great tragedies of the massacre was that not just striking workers, but also their families, were the victims.  At least 19 people died in all; of these, two women and 11 children were killed when, trying to protect themselves by burrowing under a tent, fire consumed the tent above them.  Historian Howard Zinn called the massacre “…perhaps the most violent struggle between corporate power and laboring men in American history.”  Today the massacre site includes a monument to the victims and has been designated a National Historic Landmark.

The story of the strike and its aftermath is a complicated one, and many books have been written about Ludlow and the Colorado coal strike.  Some of the resources that you can find in our library include:

Numerous other books and articles have been published on Ludlow and the Colorado Coal Strike, so be sure to check your local public or university library for more information.  You can also find records on the Ludlow Massacre at the Colorado State Archives. 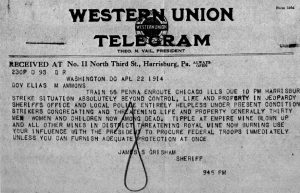 The Colorado State Archives has in its collection this and other telegrams to Governor Elias Ammons two days after the Massacre, when strikers retaliated against the troops.  “…strike situation absolutely beyond control…men women and children now among dead…”