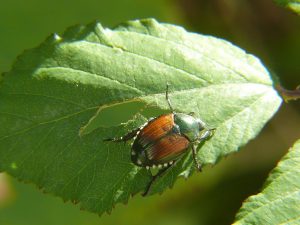 While gardening last weekend I discovered that my trees are being eaten by Japanese beetles; since then, I’ve spotted them in other parts of town, as well.  Biologists say that 2017 is the worst year yet in Colorado for the invasive pests, which up until a few years ago were only found east of the Mississippi.  According to the Denver Post, Japanese beetles have been munching their way up and down the Front Range from Boulder to Pueblo.  The Colorado Department of Agriculture issued a quarantine against the Japanese beetle in 2010, but the spread has continued.

Experts say that Japanese beetles, which are most active in July and August, feed on the leaves of over 300 species of plants, but their favorites are beans, linden trees, and rosebushes.  So what can you do to prevent and control Japanese beetles?  Colorado State University entomologist Whitney Cranshaw wrote a helpful fact sheet that describes identification of the beetle as well as techniques and recommended products for control.  Also see the Colorado Department of Agriculture’s Japanese Beetle Best Management Strategies and their powerpoint presentation about Japanese beetle.