What’s the connection between rockfall mitigation and historic preservation?  The Colorado Dept. of Transportation explains in a fascinating 10-minute video, Force of Nature:  Passage and Preservation from Georgetown to Silver Plume.  Most of us have driven I-70 near Georgetown and seen the signs warning of falling rock.  The video explains how CDOT engineers are developing systems to protect I-70 drivers from falling rocks by building fences that can slow or stop the fall of boulders onto the interstate, while also helping preserve the historic character and contemporary livability of the silver mining towns of Georgetown and Silver Plume.  For example, CDOT engineers have designed the protective rockfall fences to be environmentally friendly and painted in colors that would seamlessly blend into the mountainside.  The video takes a look at the history of the silver mining towns of Georgetown and Silver Plume, and the importance of transportation to the area — first in the form of the narrow gauge railroad, and then the highway.  By creation of a National Historic Landmark District, historic Georgetown was saved from destruction for the highway, which had been planned to snake right through the center of
town — as a result, I-70 was built alongside the cliff, necessitating the need for rockfall mitigation. 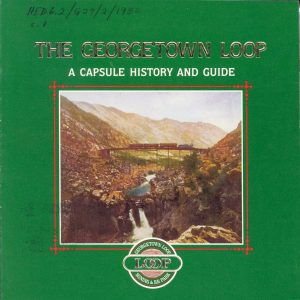 Today, the railroad has returned as a popular tourist attraction (the Georgetown Loop) and the highway is safer thanks to the efforts described in this interesting film.  For more information on the topics discussed in the brief film, visit our library’s web catalog for resources.  Publications of note include: