The Croke-Patterson-Campbell Mansion, a turreted sandstone castle at 11th and Pennsylvania in Capitol Hill, is often considered to be the most haunted house in Denver. Built in 1891 for Thomas Croke, a state legislator and landowner who has been called the metro Denver area’s “father of irrigation,” Croke sold the house after only living there six months.  It is likely that he moved out during his grief over the death of his wife, but storytellers like to say that ghosts pushed him out.  He traded the mansion to Thomas Patterson in exchange for some land near Standley Lake.
Patterson is one of Colorado history’s most notable characters. He represented Colorado in the United States Senate and owned and edited the Rocky Mountain News. He is also considered by some historians to have inadvertently been responsible for Rutherford B. Hayes’s presidency.  When Patterson died in 1916, his daughter Margaret and her husband, Richard Campbell, lived in the mansion until building their own in the 1920s. 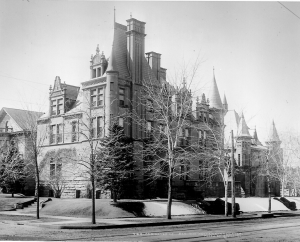 Over the years the old mansion was used for apartments, offices, and other uses. Most of the ghost stories were started in the 1970s when the house was used as office space.  The most famous story is about two guard dogs who jumped out of the 3rd story turret, said to be pushed out by demons.  Other tales include stories of crying babies and a body buried in the basement.

The ghost stories of the Croke-Patterson-Campbell mansion can be found in numerous places on the internet and have become the mansion’s claim to fame. I always felt, however, that the house’s true history outshined the ghost stories, so for the Spring 2005 issue of Colorado Heritage I told the story of the house’s history — and debunked a few ghost stories along the way. The magazine is available from our library, as are several Colorado Magazine articles that tell the story of Thomas Patterson’s colorful political career (Winter 1974, Spring 1976, Winter 1977). A full biography, Colorado Crusader for Change, is also available for checkout from our library. Written by Patterson’s granddaughter, Sybil Downing, it was published by the University Press of Colorado.