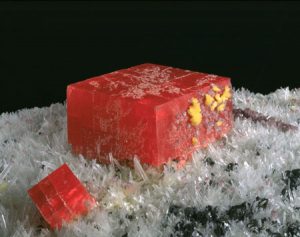 Colorado’s State Mineral is the deep red Rhodochrosite.  The Colorado State Archives tells us that “On April 17, 2002, Colorado Governor Bill Owens signed a bill passed by the General Assembly designating the Rhodochrosite as the new state mineral. While there was some debate as to whether the state mineral should be gold or silver or another mined mineral historically associated  with Colorado, it was decided that the deep red to rose pink manganeze carbonate (MnCO3) mineral, Rhodochrosite, is associated internationally with the state more than any other mineral. It is found in some gold and silver ore-bearing veins. The specimen at left is the world’s largest Rhodochrosite crystal, called the Alma King, which is on display at the Denver Museum of Nature and Science. It was found in the Sweet Home Mine near Alma (Park County), Colorado.”  You can find out more about Rhodochrosite on the Colorado Geological Survey’s State Mineral webpage.  Also, check out CGS’s Messages in Stone:  Colorado’s Colorful Geology, available from our library.