Located near Franktown, Colorado, Castlewood Canyon State Park is a great getaway just a short drive from the Denver metro area. Hiking, picnicking, rock climbing, birding, and horseback riding are some of the popular activities in the park. Dogs are allowed on most of the trails, except for the East Canyon Preservation Trail which is home to some fragile vegetation. Biking and camping are not allowed in the park, so Castlewood Canyon is a great place for a quiet escape.

Archaeological evidence shows that the first people to inhabit what is now Castlewood Canyon were hunter-gatherers around 5,000 years ago. White settlers, who began homesteading in the area in the 1880s, named it Wildcat Canyon. Then in 1890 the Castlewood Canyon Dam was constructed. In 1933 the dam burst, sending floodwaters all the way to Denver. You can read more about the flood in the book The Night the Dam Gave Way, available from our library. A few decades later, descendants of the homesteaders donated the land to the State for park use. Castlewood Canyon was officially designated a State Park in 1964, and over the years it has grown to around 2,300 acres. For more details on the park’s establishment, see Castlewood Canyon State Park: A Brief History.

Aside from the park’s natural beauty, there are some interesting man-made structures to see in the park. Some homestead ruins still stand, which you can read about in the park’s Lucas Homestead brochure. The old Castlewood Dam and the historic “Bridge to Nowhere” are other landmarks. A DVD about the bridge is available for checkout from our library.

Our library has many resources on Castlewood Canyon State Park, including park management plans from 1981 and 1991; brochures and maps; and information on the park’s geology. Also be sure to visit Colorado Parks and Wildlife’s Castlewood Canyon State Park webpage, where you will find park conditions, resources to help plan your visit, information on facilities and activities, a bird list, volunteer opportunities, and more. And don’t forget, if you don’t already have a Park Pass, you can check one out from your local library. 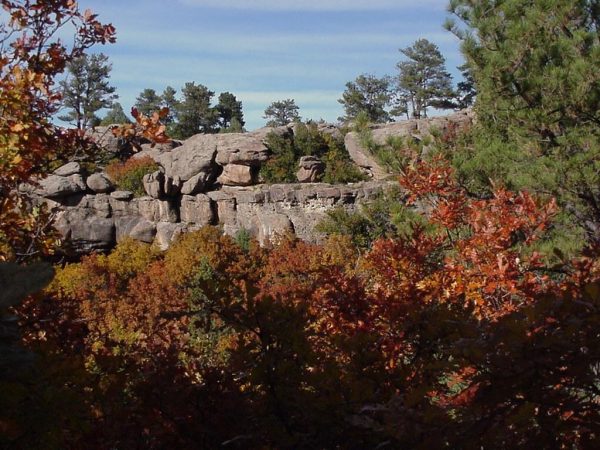